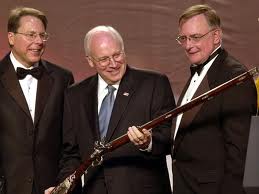 (701 words)
Well, it seems Gun Appreciation Day went off with what I guess we could legitimately call a bang.

Five people in Raleigh, Indianapolis and Medina, Ohio, were wounded when guns accidentally discharged meaning, I guess, the scars made the victims all eligible for free “I Went to National Gun Appreciation Day & All I Got Were These Lousy Flesh Wounds” t-shirts.

I have to wonder about the appeal of gun shows. Firing guns at people -- even those who have it coming -- is a no-no, and firing guns is the most fun part about being around guns.

For people who say they like action, it all sounds pretty passive. Golf shows seem more intense.

I guess at gun shows you’re allowed to pick up empty guns, pretend al Qaeda is storming your house and and go “Pow! Pow! Pow!” But you can do that with your finger gun.

I just did it right here in my office.

Fun, huh! And we didn’t even have to risk getting accidentally ventilated by a careless gun appreciator.

You don’t hear about it much, but people still on occasion rob banks and mini-marts with concealed finger guns. And you know what they say about finger guns: “Finger guns don’t kill people; finger guns operate your smart phone and are helpful in giving directions and cleaning out your nose.”

You could say finger guns are handy!

As you can surmise, my gun appreciation ranges depending on that day’s body count from bemusement to disgust.

Let’s, as they fervently wish we’d do, set aside mass shootings from just the past three days like the ones in Albuquerque (5 dead) and Houston (3 injured) and focus on the real gun epidemic.

That would be gun owners shooting loved ones or shooting themselves. And I apologize but that’s going to involve posting numbers.

The Centers for Disease Control says in 2009 that guns were the fatal tools in 19,289 deaths (18,735 suicides; 554 unintentional deaths from what I call “oops” bullets; and 333 from what it calls legal interventions, i.e., the reason most homeowners own guns).

Since it’s fair for the NRA to say even common sense gun regulations are the first step in wholesale gun confiscation, I guess it’s okay for me to paint with another broad brush so here goes.

Most of these late gun owners were absolute meatheads.

I’ve known a few of the suicides. Chances are you did, too.

The ones I recall were on fire for gun rights. They were adamant about their need for guns to protect them from federal tyranny and criminal trespass -- that’s the 333  so-called lethal interventions.

Here’s what typically happens: they get drunk because the woman they call their “old lady” has left them. They see no hope. “Doomsday Preppers” is a re-run. They put the gun to their temples.

So I think it’s time to declare Feb. 11 National Gun un-Appreciation Day. History buffs will recall that’s the day in 2006 when Dick Cheney accidentally shot 78-year-old Texas attorney Harry Whittington. My favorite part of the story remains how Whittington immediately apologized to Cheney for letting himself get blasted in face.

The date’s important because it’ll remind gun lovers that even the most sober and responsible gun lovers -- and let’s give the guy some leeway -- can misuse guns  with near deadly results.

For God’s sake, if it can happen to someone like Cheney, what chance do the rest of us stand?

A day of public service announcements might impress upon these gun lovers that the guns they so love will mostly likely be used to take their own lives.

Maybe Gun un-Appreciation Day would help get the mortal dangers of having a gun in the house through their thick skulls.

Because right now the only thing that seems to be getting through their skulls are bullets from their very own guns.

• Safety lessons from spree killers
Posted by Chris Rodell at 11:51 AM