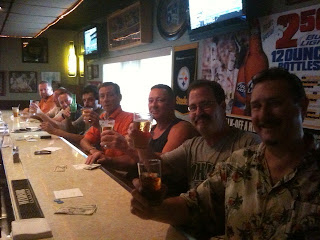 (1,176 words)
The November issue of Addiction magazine reported a study that tracked 55,000 Finnish adults over seven years and found that the nearer the Finns lived to a tavern the more prone they were to heavy drinking.

I devour everything I can involving the people from that Scandinavian nation in the hopes I’ll one day learn if it’s possible for anyone described as “Finnish” to ever successfully hitchhike.

Those hopes were again dashed, but the study gave me an opportunity to do some historical soul-searching.

Since I’ve been 18, I’ve either lived or worked usually within a short wobble from a tavern and I’ve been what I guess many folks would call loaded for long stretches   of my adult years -- and I use the word “adult” in the purely biological sense.

It started in Athens, Ohio, where I had a ninth floor apartment in The College Inn, directly above the most popular bar in town, The Nickelodeon, where I tended bar.

I remember once being pressed for affection by a girl with a reputation for loose behavior.

She hinted at a satisfying encounter if only I’d let her drive me home. I told her I didn’t think her car would fit in the elevator.

Looking back, I can’t believe how foolish I was. A young man in college should never ever turn down an opportunity for no-strings sex. I guess maybe I was saving myself for just the right woman -- and after 11 years of desperate and fruitless searching I found her in 1990 when I met my darling Valerie!

My first job -- and my second to last one -- was at The Nashville Banner. There was an outstanding bar unassumingly named after its 12th & Porter street address directly between our offices and the newspaper parking lot. It being an afternoon paper, our last deadline was 3 p.m.

Me and my good buddy Gary were among the first done and every single day we’d go to the stools right in the bar’s front window and lasso every single person who’d walk by. Took about an hour to corral a lively bunch.

Right around then Gary would announce, “Well, we’ve entered the Twilight Zone. We can either leave now and spend the next two hours stuck in Nashville’s snarling traffic or we can wait it out and then zoom right home. Let’s discuss it over another round or two!”

Then the bosses at the Greensburg paper (last job) moved me to the Latrobe bureau where Paul worked. I don’t think there’s ever been a more compatible pairing of two convivial people.

We both love baseball, billiards, practical jokes, cigars, good food and idling away days and nights in dark taverns. And, hallelujah, there was a great bar 12 steps from our front door. In fact, if the doors of both operations were open we could hear the phone in our office ring from our bar stools, which meant we could drink and shoot pool all day long and still confuse our bosses into thinking we were hard at work.

My stories from there would certainly have entertained the Finnish researchers. We’d roll into work around 10 a.m. and spend the next two hours discussing what we’d have for lunch at our favorite restaurant. Then after a satisfying 90-minute lunch, the bartender would come over and tap on the glass to let us know he was open for business.

If we didn’t come right over, ten minutes later he’d be back tapping again.

If we failed to obey his summons more than twice he’d come into the office and start swearing at us to get our asses over to the bar. He was an old Marine and one of the most profane men I’ve ever known. Dead about six years now, we loved him very much.

After about two years of this the bosses got tired of hearing other employees complain about how much fun we were having so they put an end to it and moved me into the main office where they could keep an eye on me.

It was a sad day in Latrobe. Friends asked Paul if he was going to throw me a party. He said, “It’s been nothing but one big party for two years. What do you want me to do, kill him?”

I quit that job six months later after realizing if I were a heroic crime fighter I’d love to have Super Vision, but as a working stiff I couldn’t stand supervision.

Then due to our crowded housing situation, Val suggested I snag a small apartment to use for an office.

One friend told me he had a place he’d let me have for $250 a month. I told this to Dave, owner of The Pond, and he said, “I have a place up above the bar I’ll let you have for free!”

Not wanting to be that sort of mooch, I shrewdly negotiated him up to $150 a month. It’ll be six years in March and, man, it’s just been a blast.

So for me it’s always been a sort of chicken and egg thing. Do I drink a lot because I’m always so near a bar or do I gravitate to bars because I drink a lot?

And how different would my life be if I worked over, say, a barber shop, a hardware store or maybe a brothel?

A hardware store’s an interesting option. Loafing there would lead to more household skills and Val would like that. But the hardware store guys I know are mostly conservative in thought and deed and can thus be grumpy. I can only purchase so many tools and I can see them after a week or so chasing me out the door at the point of a shiny pitchfork.

When you think about it a brothel might work best, that is if I could get Val to overlook my activities there and those vows about forsaking all others, fidelity, increased risk of venereal disease, etc. And, as previously mentioned, woman of low reputation have always found me charming.

The women probably wouldn’t tire of hearing me talk and the time spent there would lead to lots and lots of colorful stories so I could certainly justify the move on professional grounds.

I guess for now I’m right where I belong, a happy man happy to spend a good bit of time at what’s called the Happy Hour.

And that’s just where I’m headed. I’ve done enough for one day.

You could say I’m Finnished.