The splendid folly of life's roadtrips 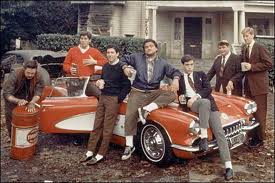 (923 words)
My dear nephew called me about a month ago and asked if he and four friends could stay at our house over the holidays. They were driving from Nashville to New York City to see Coldplay.

Of course, I said, only half sure it would ever happen.

As the day approached the weather worsened. Blizzards were forecast, temperatures dropped and they began hearing from parents and friends that making an 18-hour trip was ill-advised.

“Making that kind of drive with you, someone who’s never driven in snow, is absolutely foolhardy,” I said. “That’s why I think you should do it. If you don’t do stupid things when you’re young you may never do stupid things as long as you live.”

The ill-conceived road trip is one of the stupidest things young people can do so it invariably provides some of life’s best memories.

I’ve been a reckless road tripper since I’ve been old enough to drive.

Nothing pleases me more than loading a car with friends, coolers of beer, great tunes, a distant destination and a lamebrain mission.

I guess my first real road trip was with my old buddy Pete in September 1981. We were 18. We drove from Athens, Ohio, to Buffalo to see George Thorogood and  Journey open for the Rolling Stones. It was the “Tattoo You” tour and the debut of the concert staple “Start Me Up.”

We’d spent the night in the parking lot where every individual was drunk or high, none more so than these rowdy Canadians who’d road tripped in from Toronto. They seemed like great guys.

But I know at least one guy who I guess doesn’t think so. He was in the port-o-john when the Canadians for some reason turned the thing over with him in it -- door side down.

I haven’t set foot in a port-o-john ever since.

Throughout the ‘80s there were roadtrips to see girlfriends, visit buddies, crash parties and visit things like Florida snake farms.

I guess my most epic road trip was the summer of 1983. My friend Doug had an entrepreneurial bent. He’d purchased a radar gun and a pipe and net stall and was convinced he could make a fortune traveling the great Midwest hooking up with carnivals where we’d let hicks heave fastballs: Three throws for a buck, guess the speed of the third and you win a 25-cent batter’s helmet.

He persuaded me to tag along with the promise that we’d make lots of money and meet lots of girls.

We made practically nothing and had to struggle to meet girls who thought we were just like all the junkies and ex-cons who make up your typical traveling carnival.

Most of the carnies were what we all consider scum. I learned that summer that scum can be a lot of fun. We’d spend nearly ever night drinking beer and turning the carnival into our own personal playground.

While we didn’t make much money, I also learned there were ways even shiftless people can always earn a little scratch.

That’s what the man known only as “Judge” taught me. He was called “Judge” because carnies were always asking him for legal advice. He had no law degree, but he’d appeared in court so often for so many different transgressions he’d become courtroom savvy.

He was covered from head to toe with crude jail tattoos. And by head to toe, I’m including horizontal directions.

He’d meet adventurous strangers and say, “I’ll be you $20 I have your name on my penis.”

You’d be surprised at the number of people who’d fall for a bet like that.

I’m unable to verify, but legend has it that he’d pull out his pride and there on the shaft were the words, “YOUR NAME.”

I don’t have any tattoos, but if I’m ever forced to get one I’ll consider doing that before getting something like “MAMA.”

Looking back, I don’t know how my parents survived that summer. They must have been worried ‘round the clock.

I remember clearly being at the Elkhart County Fair in Goshen, Indiana, and calling my parents collect. They always wanted to know where we were the next day.

“Dad,” I said, “it could be one of five different states.”

Brad and his friends couldn’t have been nicer during their visit. We had a wonderful evening with them. Our daughters just adored both the boys and the girls. It was a very special memory.

That’s why I felt paternal wariness as I watched them fishtailing down the mountain in a snow so heavy I wouldn’t leave the house that day. I told them there’d be no shame in missing the concert in favor of some cheap hotel. It was a dangerous day to be driving.

They made it to their friend’s house outside New York in about eight harrowing hours.

They spent the next day in Manhattan. They rode the subways, saw Grand Central Station, the Statue of Liberty, Times Square and the 9/11 memorial.

Outside the show, tour organizers noticed their enthusiasm and swapped their nosebleed seats for the front row the band reserves for its most ardent fans.

The drove straight home 16 hours the next day. Brad posted a Facebook scrap book with more than 100 pictures under the title, “The Best Weekend of My Life.”

And now he’ll know forever more that stupid can sometimes in the long run be a real smart move.