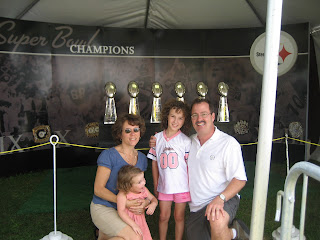 (862 words)
All but four teams are left in the NFL march to the Super Bowl. That means the rest of the country needs to find some artificial reason to become momentary fans of foreign teams populated by mostly strangers and garden variety felons.

It’s particularly tough here in Pittsburgh where playoff football is considered our birthright. We’ve won more Super Bowls -- six -- than any other city and have in our collective scrapbook some of the NFL’s most heirloom plays and players.

I love the NFL.

And that’s not easy these days because I believe our premier sports league is in a steep decline.

These days to be a fan of the NFL, you need to first be a fan of beer and truck commercials. That’s what takes up most of the 3 1/2 hours of a typical game in which there is on average about 11 minutes of watching men actually playing football.

Infuriating refereeing leads to interminable delays while replay refs take forever to come up with calls that seem to defy logic, not to mention clear visual evidence. Career-ending injuries are pervasive. Tickets cost about $100; warm domestic beers about $10 -- and those are the pre-season prices.

The marquee players are often preening divas, many of whom have arrest records for beating either girlfriends, wives or the occasional over-served fans. The owners are egotistical asses, PEDs are rampant, analysts are blowhards, commissioner Roger Goodell has a messiah complex,Thursday and Sunday night games suck for home fans  . . .

I love the NFL!

So let me take you through my thought process on how I determine for whom I’m going to root. I ask myself the following questions:

Have I enjoyed myself in the team’s city? Do I know any fans from there? Are they obnoxious? Do they owe me any money? Do I owe them any money? Have they ever won a championship before? Is their owner a bigger jerk than the owner against whom he’s competing?

My wife and I honeymooned in San Francisco and my every memory of being there is golden. Best part? We smuggled a bottle of cheap champagne and a sleeve of plastic cups onto the Golden Gate Bridge. Out in the center we popped the cork and announced to a host of smiling strangers, many of them internationals, “We just got married. We’d like you to join us in a toast to our marriage and your happiness!”

It was beautiful. We heard hearty congratulations in about a dozen foreign tongues. At least I think they were congratulations. They may have been saying “We love free hootch!” I never bothered to check.

I love the city. But the 49ers have won five Super Bowls. As a Steeler fan, I can’t abide them encroaching on our sacred six. So sorry, San Fran. You’re out.

Atlanta? It’s one of the few major U.S. cities in which I haven’t been there long enough to do anything more than urinate. When I think of Atlanta, I think of how obnoxious their fans were when they delivered the most devastating loss I’ve ever known, that being the Braves over the Pittsburgh Pirates in 1992. So there’s really no reason for me to root for Atlanta.

In the AFC we have the Baltimore Ravens v. the New England Patriots:

This is a toughie because the Ravens are maybe Pittsburgh’s greatest rival ever and I really respect the way Baltimore plays football. And I’ve had some magnificent times in Baltimore. But there’s one outstanding reason for being against the Ravens and he wears no. 52.

That’s Ray Lewis. We’ll never know his role in the year 2000 double murders in Atlanta, but we know he knows who did it and two young men lie in graves soaked with tears of loved ones who cry out in vain for justice. That’s a lot to forgive.

And, yeah, I hate his pre-game dance, his sideline pep rallies, and how he tries to drag God onto the field when everyone knows God loves Dan Rooney and the Steelers.

That leaves the Patriots, which means that leaves next to nothing. I’ve had some nice times in Boston and am friends with several diehard fans. But I hate Tom Brady and Bill Belichick. Together the pair won three Super Bowls in four years (2002-’05), but those were prior to their admission that they were guilty of massive cheating.

Ever since they’ve squandered the prime years of one of football’s greatest quarterbacks and only have two soul-searing Super Bowl losses to show for it.

And that pleases me.

So here’s for whom I’ll be rooting:

Yes, I’m rooting for Atlanta, home to multitudes of people who pissed me off living a place I’ve only been to relieve my bladder.

And that’s exactly the kind of analysis you can expect from here through the Super Bowl Sunday.

• The NFL sacks itself