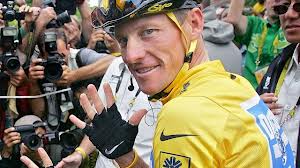 (627 words)
Here’s how skeptical I’ve become of everything Lance Armstrong says: I won’t be satisfied unless at the conclusion of his interview Oprah demands he remove his pants to reveal the results of his famous surgery.

That’s what started all this, wasn’t it?

Armstrong claimed cancer led him to have a testicle removed. He overcame the circumstance and went on to win seven Tour d’France titles and eventually raised about $500 million for cancer research.

And in the process he built a personal empire worth in excess of $100 million. His compelling story made cycling him an American sensation with fame, adulation and guitar lessons from Sheryl Crow.

Now we know it was all built on lies.

There’s a prevailing argument that says we should cut Lance some slack for all the good he’s done.

We’re charmed whenever someone blessed decides to give something back.

We're surprised by something we should expect.

Why, for all we know now, maybe Lance was calculating that attaching himself to such a worthy cause was a means to a lucrative end.

He’s our worst cheater, not just because of the scale of it, but for the lives he ruined along the way.

He intimidated those who tried to tell the truth about the epic scale of his lies. So worse than even being a lying cheat, he was a bully who used his prestige and popularity to threaten devastating legal and personal repercussions on anyone who dared challenge the myth.

Our Hebrew friends have a word for it: chutzpah.

How many times do you recall seeing his smiling face on the cover of some magazine or being feted by ESPN at some awards banquet? For years the universally flattering stories hailed him as a superman.

And he basked in it all knowing the whole time it was a huge fraud.

He has near zero body fat, but he sure has a lot of gall.

He lied to our children. He sold himself as a grand role model. You, too, he’d say, can be just like me. Just eat whatever cereal I’m sponsoring, guzzle the sports drink I’m promoting, stay in school, love your mama and work hard and this can all be yours. Oh, and be sure to buy Nike!

For a guy with such a skinny little ass, he’s pretty damn cheeky.

The interview with Oprah, it seems, is devoid of contrition. Sports pundits are hinting his whole reason for coming clean now is to cut his losses and get back to competing, like he thinks that will solve all his problems.

Think again, bike boy. That kind of brazenness might work on the grueling Stage 11 climb over the Alps at LaToussuire, but it won’t work here.

He’s finished. He’s going to lose everything and will go down in history as the worst sports scoundrel in an era dominated by despicable characters. Worse than Tiger, worse than Clemens, worse than Bonds.

Because no one else comes close to matching the enduring disparity between how long he steadfastly maintained he was clean and knowing all the while he was a filthy cheat.

No one else went to such exorbitant lengths to protect an empire built on lies.

That’s why I’m hoping Oprah will conclude her interview by saying, okay, Lance, we need you to drop your pants so we can all get a peek at your package.

Understand, I’m not saying he didn’t undergo surgery. On the contrary.

My contention is nothing was removed during the procedure.

I think doctors made testicular additions.

Because what Lance Armstrong’s been doing for the past 15 years has taken an awful lot of balls.