Oprah & the art of the interview 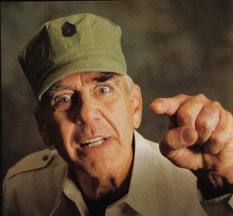 (667 words)
Rather than Oprah, I would have preferred Lance Armstrong had submitted to a no-holds barred interview with R. Lee Ermey who would have called him a namby pamby jack wagon.

I posted that on Facebook and was charmed by one prospective question The Gunny might have asked, this by professional interrogator Chris Foreman of The Tribune-Review: “What’s your major malfunction, One Nut?”

Oprah never came so pointedly close to cutting to the chase.

And the setting was all wrong. It was at the posh Four Seasons in Austin and the room looked like it had been decorated by Martha Stewart. It was so very tasteful. I recall seeing a bowl of fruit on one of the tables and both glasses had straws.

Straws! I have a real problem with straws, believing the only adults who should use them are ones who’ve lost both their arms in things like farm thresher accidents and are incapable of the simple motor function of raising a glass to their mouths.

An interview of this cultural import required a setting more stark, maybe someplace like Gitmo, a place where no holds barred includes waterboarding.

Let me re-iterate: I barely mind that Armstrong cheated to win bicycle races. He deserves our enduring scorn for bullying innocents who had the temerity to tell the truth about him. He used his power, his prestige and his army of lawyers to harass anyone who threatened to bring down his house of cards.

That to me is waterboard worthy.

That’s why I was disappointed in Oprah. She seemed less interested in grilling Armstrong than in raising national awareness that she has her own network -- conveniently named OWN -- that few Americans even knew existed among our plethora of channels.

It should never have taken 2 1/2 hours. Charlie Rose, Piers Morgan, Megyn Kelly or any of the other Victoria Secret babes who moonlight as Fox News anchors could have gotten it down in a snappy hour.

It wasn’t until the credits began to roll, however, that it began to gnaw on me.

It was a production that three people -- subject/interviewer/cameraman -- could have composed and posted on YouTube. Heck, with a wide enough camera angle, you could swap person no. 3 for a sturdy tripod.

But I understand Oprah is expecting a big audience so it needs to appear professional (she got 3.2 million viewers, which sounds about what your typical 11 p.m. “Seinfeld” re-run scores).

After Oprah’s name, they flashed a screen that showed eight producers. Eight! I was stunned.

Then they rolled the next screen and stun turned into what I guess you’d call flabbergastication.

There were a dozen people named as co-producers.

I couldn’t believe it. That was at least 22 people whose job it was to say things like, “Great idea, Oprah!” “You’re the best, Oprah!” and, I guess, “Would Oprah like me to bring her another fig?”

And each one of these people, guaranteed, had a flunky or two of their own who they could order to go fetch the figs.

So as someone like me who sits there and wonders all day and all night where he can find a high pay/low work job I was incredulous.

That many people could have wrestled Lance to the ground and tickled the truth out of him, not as satisfying viewing as waterboarding, but it at least would have justified their cushy jobs.

I wondered which of the producers was charged with ensuring the straws for the sparkling water were proper. The little paper straw contraceptive would need to be removed, the straw elbow joints angled just so and leaned at pleasing symmetrical angles.

In hindsight, the appearance of those precious details revealed as much as Oprah did in her over-long, over-produced and under-satisfying show.

That is when it comes to human beings, Armstrong truly sucks.

• Is it safe? A tortured debate
Posted by Chris Rodell at 7:47 AM