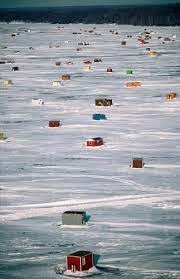 I hadn’t really thought about how close I’d come to dying there until a friend mentioned fun things to do in Minnesota in January.
Dying didn’t make the list.
But what I was doing moments before I nearly did does.
Something fun to do in Minnesota in January?
Try doing donuts at 65 mph on a frozen lake in a Toyota Corolla with the walk-away insurance.
Now, that was fun.
And often deadly, as I was soon to learn in a profanity-laced tirade over my suicidal naiveté.
I’ve forgiven myself. I was so much younger then. Just a kid really. I had no rational grasp of how responsible adults were supposed to behave in potentially dangerous situations.
I was, I think, 42.
I was doing wacky feature stories for Details magazine. By then I had a treasure chest of great Americana, heartland stories about oddball rituals and offbeat individuals. Mille Lacs, Minnesota, in January had both in spades.
Mille Lacs is a 207 square-mile body of water that every winter becomes Minnesota’s third most populace city. It has plowed roads, pizza delivery, distinct neighborhoods and regular trash pick up at temporary $15,000 homes all atop a 3-feet frozen foundation.
It’s, well, cool!
With windchill temperatures regularly dipping to minus-60, of course it is.
That’s how I pitched the story and it’s all true.
It’s a great American spectacle. People living in some of our most harsh elements conceive ways to make it fun. They choose to do more than merely endure.
They enjoy.
My assignment was to spend three days out there on the ice, do some fishing and experience what it was like to party in one of these pimped out ice-fishing homes; some of them come with hot tubs, satellite TV and interior conditions so comfy that most everyone wears shorts and T-shirts.
It’s just like fishing in your living room only if your living room floor was entirely made of ice with 12 frisbee-sized holes in it.
It was great fun.
My second greatest memory was looking out the window and seeing a trio of eagles, each as big and sturdy as winged fire hydrants, feasting on the walleye entrails of the fish we’d just caught and gutted.
My greatest memory is the big bearded dude waving his arms and screaming for me to get my car off the ice.
Ice, you see, is organic. It grows and shrinks given the wind, the sun and other elemental conditions.
I’d vowed I’d drive my car right out onto the ice so I could say I’d driven a car on ice.
Again, cool. Right?
But I was doing the off-road equivalent of driving on ice. The actual “roads” are there for a reason. Men and women experienced in ice thickness take pains to find the most stable parts of the ice.
This I didn’t know.
So I pulled off the land, onto the ice, and just gunned it.
It was what I think driving on the Bonneville Salt Flats out in Utah must be like, only with about a 105-degree temperature differential.
Everything was white and smooth, glistening and slippery. I got it up over 60 and just cut the wheel.
Wheee! I did about a dozen donuts. It was like an amusement park thrill ride. I did it again. There’s a lot of room to do donuts on the frozen surface of a 207 square-mile lake.
I was about to do a third round when I saw a bearded man on a ski-doo making a bee line for me. He was waving his arm in alarm.
“You idiot!” he said. “Get the car off here. You’re gonna kill yourself!”
He told me I was driving on unstable ice and that every year four or five idiots like me fell through and drowned.
Even if you survive drowning or hypothermia, they make you pay about $5,000 to salvage the vehicle from the lake bottom 30-feet down.
So a good day almost went really, really wrong.
Funny, I’d never thought how close I’d come to dying until my friend mentioned fun things to do in Minnesota in January.
Recklessly driving a nearly 2-ton vehicle across an indeterminate thickness of frozen lake was sure fun.
I’m glad I did it.
I’m even more glad I didn’t die when I did.

Related . . .
Minnesota Metropol-ICE: a travel story
Florida rental car abuse
Of mallbergs, fenderdung and other made-up winter words
On the hottest day of the year, a toast to ice
Pittsburgh robbery suspect flees on ice