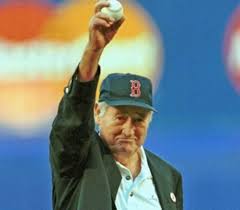 “People ask me what I do in winter when there’s no baseball. I’ll tell you what I do. I stare out the window and wait for spring.”
— Rogers Hornsby, MLB HOF 1942

That's the sentimental quote on SpringTrainingCountdown.com, the baseball-centric site that right now informs there are 42 days, 12 hours, 9 minutes and 17 seconds until pitchers and catchers report.
I love the Hornsby quote because it summarizes the seasonal longings I feel during the depths of winter. It’s particularly acute today because the temperature is minus- 180 degrees Fahrenheit.
Not here in Latrobe.
That’s the temperature deep inside all-time slugger Ted Williams’s frozen head.
I mention this now because I believe it’ll take about 42 days, 12 hours, 8 minutes and 37 seconds to thaw something that frozen and have it ready to suit up to pinch hit for the 2016 Pittsburgh Pirates.
Williams’s remains are among 139 cryonically frozen dead human beings being — and 39 pets! — warehoused in the Scottsdale headquarters of Alcor, a company that one day intends to bring them all back to life.
It’s assumed they have champagne, too, chilled for the eventuality.
My guess is the MLB players union is litigating ownership to classify the former Red Sox, who died in ’02, on some kind of really extended injured reserve.
I’m surprised I don’t hear more about the deep-frozen body of the man admirers called “The Splendid Splinter.” He’s one of my favorite Americans.
He was in 1941 the last man to bat .400. He hit left, but threw right. He had 521 home runs, but “just” 2,654 hits. How did one of the greatest hitters in baseball — many still consider him THE best — miss the milestone 3,000 hit club?
He was a patriot.
He served with heroic distinction in not one, but two overseas conflicts. He was a Navy fighter pilot for three years in World War II, and later served three years in the Korean War where he received the Air Medal and two Gold Stars for valorous conduct during 39 missions.
He was astronaut John Glenn’s wingman in Korea and Glenn said Williams was the best pilot he ever knew.
So in the prime of his career, he lost six seasons to service. It’s not inconceivable he could have snagged another 800 hits, enough to put him among the top 6 all-time hitters.
Being in one hall of fame is historic. Williams qualifies for three: Baseball, aviation and fly fishing. The IGFA Fishing Hall of Fame features Williams for the many fly fishing records he’s held.
And he just seemed like this great boisterous guy. I remember ESPN airing an interview between him and late slugger Tony Gwynn — I loved Gwynn, too — about hitting and it was just so joyful, these two old pros swapping stories, bantering and laughing like the kids we all used to be.
I think about Williams a lot this time of year.
Because thanks to Alcor there’s still a remote chance I’ll get to meet him, even though he’s been dead 14 years.
Who’s to say Alcor might someday succeed in revivifying Williams and the others from their deep freeze?
That would be, well, cool?
It’d certainly give Williams the opportunity to be a future cinch for comeback player of the year. His comeback promises to be the greatest since Jesus Christ.
Or maybe Austin Powers.
And he’d look great in a Pirate uniform.
The off-season’s been tough for fans like me. The Cubs make some great moves, the Cardinals are always tough and the Pirates have done squat.
Adding a hall of famer — even a dead one — would warm the fans’ spirits.
It couldn’t hurt. Hell, the entire roster of the 105-loss 2010 Pirates played as if they’d all been cryonically frozen by — speaking of your walking dead — manager John Russell.
Even at minus-180 degrees, Williams is bound to generate more warmth than Russell ever did.
The fans would love to have someone as historic as Williams on the bench.
Me and my buddies would be his No. 1 fans.
Heck, there have been countless Opening Days when we, too, were frozen.

Related . . .
I play Centerfield
Roberto Clemente, Mr. 3,000
A great day for baseball! Let’s play 2 … or 3 …
I hope I don’t die while the Pirates are winning and I hope the Pirates never lose
The man Maz turned into a Communist
The Bucs need Barry Bonds

Tony Gwynn a slugger?Maybe the best pure hitter since Williams I could see,but slugger,no. He played 20 seasons and hit 135 homers,less than 7 per year. That issue aside,fun read!

Did you have to look that up or are you an irredeemable seamhead? You're right. He did hit one in the WS against the Yanks in, I think, '99? He played with so much joy. Loved Tony. <>