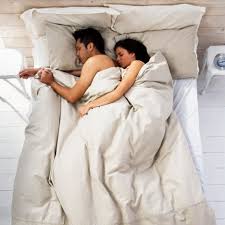 It was just a suggestion, a thought extended into a casual question. But my wife’s reaction made me feel dirty, like it was the sort of proposal I should save for the prostitutes.
I can’t deny it. What I was suggesting was deviant.
We’ve been sleeping together for 23 years and it’s something we’d never discussed, much less done.
“C’mon, hon,” I coaxed. “Let’s just try it. If you don’t like it, we can stop and go back to doing it the way we’ve been doing it every single night since 1992.”
But she was firm.
“No!”
So it’s not going to happen.
And now I’m fearful I’ll go to my grave never knowing what it’s like to sleep on the left side of the bed.
I’d asked Val if she was a willing to take a sleepwalk on the wild side. She was refusing.
Are you like us? Do you each have your own side of the bed? Or do you swap — Left! Right! Left! — with wild, inconsequential abandon, you swingers, you.
Sleeping on the “wrong” side of the bed is the only kind of side-switching left to devout heterosexuals.
I don’t recall how I started exclusively sleeping on the right side of the bed and her on the left.
We didn’t do a pre-nup. She didn’t claim ancestral prerogative. And if there was a pivotal coin toss in there somewhere it’s something I’ve forgotten.
A February study by Saatva, a fancy mattress company, found that 40 percent of Americans always sleep on the same side of the bed, with men preferring the right.
It’s very odd, like eating nothing but Hamburger Helper for supper or going to Ocean City for vacation every single summer.
I could see her territorial insistence if we slept on a common mattress. She’d wisely want to avoid sleeping in my ruts or else seek regular chiropractic adjustments.
But we’ve always shared a full-flow waterbed, something only 5 percent of the sleeping population enjoys.
The only reason I can figure the number is so low is because the waterbed is freighted with hippie connotations and people still have their disco era hang-ups.
They don’t know what they’re missing. We both love the waterbed. It’s warm, soothing and is as near as you can get to that feeling of returning to the womb without inconveniencing mom.
And that's groovy!
Val sleeps like a log, much better than I do.
It’s not uncommon for me to be jarred awake in the middle of the night to spend the next hour tossing and turning all the while mentally fencing with my failures.
I used to get up and watch some TV, but now I realize the sleep deficit will be the same whether I’m tubing or not. So why bother?
And there in the bed cuddling with my wife is so splendidly comfy I’m reluctant to escape the sanctuary. On most days getting out of bed makes me feel like WWI soldier being ordered to vault from the trench into No Man’s Land certain to face heroic annihilation.
Who needs that?
But now with her refusal to switch sides, I’m left to wonder what it is about the left side she’s so reluctant to relinquish.
Just what kind of party is going on over there?
And how come I’m not invited?
This I’ll have to sleep on.
Or sleep just to the right of.