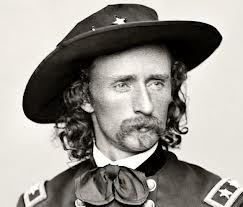 I wrote this in September ’11 and at the time correctly predicted the topic would lead to an onslaught of readers who’d arrive after googling “Custer’s penis.” That’s exactly what happened. A week doesn’t go by without someone somewhere showing up at my blog after typing the “Custer’s penis” search term. It’s not a top 10 story, but probably a top 12. Enjoy your Sunday and … Let’s Go Steelers!”

Second, I know the instant I type “general custer’s penis” into a subject line it may awaken a sleeping automatronic army of Custer devotees who stir when the computer pings over that very subject.

So what are we to make of this man once so beloved by his contemporaries and today reviled by those of us who abhor war crimes and injustice? What would say to his spirit?