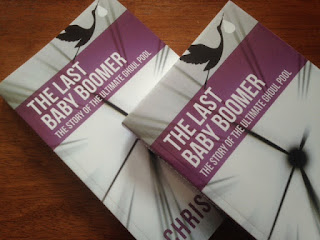 My 8days2amish twitter followers jumped from 364 on Jan. 20 to 699. Very nice. It was all thanks to an amazon.com giveaway promo for my new satiric novel “The Last Baby Boomer.”  I’m hoping it becomes a trend. I’m very proud of the originality of my tweets and think them deserving of a wide readership. But what do I know? Here. You decide . . .

• Our greatest frustrations stem from when we demand perfection from those incapable of providing it.

• Martial Law is when a nation's military imposes its will on citizens. Marsha Law is when the oldest daughter on Brady Bunch imposes hers.

• A tornado warning is dangerous weather. A tornado watch is an inefficient timepiece whose hands spin really fast.

• I can't describe how much it pains me that if I ever get into a so-you-think-you're-better-than-me argument with Ashton Kutcher, I'd lose.

• When people say you think funny what they're actually saying is you think.

• I know this is a risky admission, but I consider myself an elitist. I believe in education, experience, manners, civility and earthly coifs.

• In the future, hunger will be eliminated when Mark Zuckerberg develops a way to turn Facebook food pictures into actual meals.

• Just because a person is bad at math doesn't mean he or she can't be considered calculating.

• Would a T-shirt still be a T-shirt if I got one with a big Q on the front?

• Ideas about how to advance more quickly through lines are queue tips.

• Many cynics today are ridiculing Obama for crying over dead children. I'm glad I'll never be one of them.

• If wife had been as aggressive selling http://UseAllTheCrayons.com  as she was with Lucy's Girl Scout cookies J.Grisham would be my proofreader.

• After doing so for nearly 8 years I can only conclude blogging is like butterfly catching only with fewer tangible results.

• It is one of our greatest paradoxes, but a really big family can also serve as one of nature's most affirmative contraceptives.

• I used to pretend I was too sick to go to school. Now, I pretend I'm not hungover nights after I swore to wife I wouldn't drink too much.

• Remember back when everyone said Trump was finished for tastelessly alluding to Megan Kelly's menstrual cycles? We were so quaint back then.

• Those running for president who think America is no longer able to achieve great things should be called cantidates.

• Too many people who mistakenly believe they have the world on a string realize too late what they’re actually holding is a lit fuse.

• Does it make me odd that I enjoy Applebee's yet am fearful of bees on apples?

• I’m beginning to understand the peacefulness that comes from no longer trying to change the minds of the mindless.

• I wonder if sharp bullets hurt less upon penetration than blunt ones and I wonder how long, given gun sales, it'll be before I find out.

• My efforts to interview El Chapo collapsed after I insisted he come to the Tin Lizzy and buy me dinner.

• Nostradamus became famous as a visionary who could see the future; not so much his cousin, Nostrildamus, who could smell it.

• I’m not saying I'm a slob but just to be safe I always make sure to wear a shirt that matches my dinner. Today my shirt is pizza colored!

• My career feels like I'm in darkened gym ordered to box bigger night-vision goggle wearing opponent with Sarah Palin telling me what to do.

• I’m aghast networks continue to broadcast "news" it'll snow in January when no one  realizes Rick Santorum is STILL running for prez.

• In a world that made perfect sense the saying would be, "Where there's smoke there's a cigar. And bourbon.

• We have blankets of snow and sheets of ice. Anyone know where I can find a good slush pillow?

• If people distraught over deaths of David Bowie & Glenn Frey, what will they do when someone truly and universally beloved kicks? Someone like Dick Cheney?

• I think my wife would be more receptive to romance if I'd stop insisting she dump Gatorade on my head after each successful coupling.

• Super Bowl prediction: Carolina 54, Denver 31. Not the score. That's my prediction of the high temps in each town at kickoff.

• Flying commercial always makes me feel like a foot getting shoved into a bowling shoe.

• I wonder if any of the fabled explorers ever considered naming a prominence "Moot Point" but decided the gesture would be meaningless.

• Just wasted 15 minutes trying in vain to prove I'm stronger than a toilet. You've won this round anti-slam lid!

• Can’t believe Ernie Borgnine's been dead nearly 4 years and we've yet to find an Ernie Borgten.

• Although it's bound to upset traditionalists, isn't it time we start referring to the 2K-old "New Testament" as the "Not-So-New Testament?”

• A swim meet is an aquatic competition. A swim meat is an edible fish.

The only reason my Twitter profile looks amazing is WizUgo com. It started increasing my follower's list in a few days. The results were steady and legit. The most important part is this tool is totally safe i.e., your Twitter account won’t get banned from it.