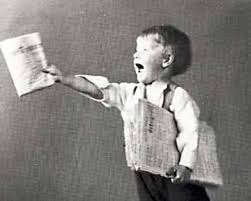 A younger friend recently asked where my wife and I met. I told him we were working at the local newspaper. And for the first time it dawned on me the story of our romantic coupling will one day soon require further explanation.
Something I’ve cherished nearly my whole life is going away.
And I don’t mean Val (last I checked, at least).
No, today I’m lamenting the apparent and inevitable demise of newspapers.
Many people, especially corporate beancounters, think the solution to declining readership is to make newspapers less like newspapers. They instead cater to people who prefer to get their news digitally.
But what’s even more disappointing is how newspapers are becoming openly hostile to those who enjoy getting home delivery.
It’s not unusual to see front page pictures with cutlines teasing readers to jump to the story — not on an inside page — but to the on-line version with all its tedious distractions.
So they want you to stop reading the paper you paid for and go to site most of them give away for free, the one where none of the industry geniuses have figured out how to earn so much as a dime.
Think I’m kidding?
Just last week the venerable Philadelphia Inquirer (third oldest U.S. newspaper, recipient of 20 Pulitzer Prizes) and its two sister publications were donated — donated! — to the non-profit Institute for Journalism in New Media, part of the Philadelphia Foundation.
So one non-profit is being absorbed by another and at this rate it’s apparent all I have to do to eventually own one of America’s great newspapers is just bide my time.
Did you know my first job was delivering newspapers for the now-defunct Pittsburgh Press?
I had one of the largest routes in the South Hills, 100 daily and 150 Sunday. I was in the 9th grade and making $100 a week; at Christmas I’d earn $500.
I remember thinking, man, if I can get paid this much to deliver the news, how much must they pay the geniuses who write it?”
In my career, I’ve only earned steady newspaper paychecks for five slim years, but I’ve always considered myself a bona fide newsman. I love newspapers and admire the people who put them together.
And I revel in reading a good paper. I savor them. I dart around between sections. I serendipitously discover stories I’d never find on-line.
So it hurts to see them going away or see them pricing themselves to a level that makes me hesitant to purchase. The daily Post-Gazette is now $1.50 a day. I feel like a chump buying it when I know I can get it free on-line.
The pain is particularly acute for me because my Mom feels the same as I do. She must have her daily paper. The problem is she is senile and is merely attached to the idea of getting a newspaper, even though she doesn’t comprehend a word.
“I have to have it to start my day,” she says.
It is her ink-stained security blanket.
And now the (somewhat) more reasonably priced paper, The Tribune-Review (75-cents), has ceased delivery to the 200-unit South Hills apartment where she lives. It’s true. You can no longer get the Pittsburgh Tribune-Review delivered in some places within Pittsburgh.
They say she should read it on-line, this to a woman who often gazes at the TV remote the way the ancients used to gaze at a solar eclipse.
Now I’m looking into ways to pay an exorbitant price to daily deliver a newspaper to a woman no longer mentally agile enough to read it, but feels inexplicably lost when it’s not there.
And newspaper can’t make money with devoted customers like that?
If only I could deliver industry-saving solutions to something that means so much to so many.

Related . . .
The decline of newspapers and the death of Mike Piggott
Industry-saving idea: edible newspapers!
1,001 words on word counts


The vanishing stigma of typos