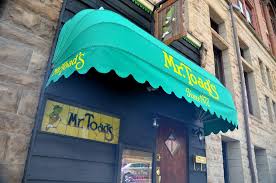 I never thought of wearing a hat in heaven until I saw my buddy Ed wearing his Sunday in his coffin.
It said “Pittsburgh, Pennsylvania.” So people in heaven will know instantly, not only was he good on Earth, he was also very cool.
And even in death, he was.
He was Ed Guidas, 53, an owner of Mr. Toad’s pub in Greensburg.
He started out there as a bartender back in the late 1980s. That was back when I worked at the local newspaper, The Tribune-Review. The paper had a lot more employees then and we all seemed to have good reasons to drink every night.
So at about 11 p.m. after we’d put the paper to bed, the whole newsroom would pour into Toad’s to booze and bitch.
I think we all enjoyed Ed because he was as informed as we were, but didn’t share our warping cynicism. He was an appealing combination of tough, but sweet.
I’ve always said Ed could have presided at our wedding.
Because it was at Toad’s with Ed bartending that Val and I began to click. In fact, without Ed I doubt we’d have ever fallen in love and had kids.
There’s no way a girl like Val would have fallen for a guy like me if she’d been sober.
The local newspaper crowd began to change sometime after I left, but Toad’s never did. It remains a great bar.
I stopped in there after a book signing and gave Ed a copy of “Use All The Crayons!” I was hoping he’d like it.
He did, of course.
I think what many people fail to realize is how much people like Ed helped me write that book.
Not by offering suggestions or helping me craft ideas, certainly.
But just by living. Just by being someone whose laugh was so warm and wonderful you’d drive out of your way to share an offbeat observation in the hopes they’d find it funny.
It’s like that with so many of my friends.
Yours, too, I’m sure.
There’s just something about the laughter of a good friend that takes all your troubles away.
I hadn’t seen Ed in a couple years when I was at my old Pond office this summer and got a text from the owner saying Ed and his girlfriend were there and wanted to know if I was around. He’d been driving past and remembered I hung out there.
I was and by chance Val was with me. She hadn’t seen him in years.
Well, we just had the greatest time (I wrote about a humorous aspect of it in the first link below).
I vowed that night to stop by Toad’s more often and, yes, that’s the kind of vow I honor.
I saw Ed twice in the months before his heart exploded on Saturday.
And, boy, am I glad I did.
Not because I told him how much he meant to me, Val and our friends. Not because we shared a soulful hug like you do with someone you fear you might never see again, which would have been too socially awkward.
But just because it let us do the things that make life worth living.
It’s not complicated.
It’s just fun.
So while you’re wearing your hat in heaven, my friend, I’m tipping mine to you and your memory down here on Earth.
You will be missed.

Related . . .
The story of my webbed tows & other human oddities
A day for real mourning: RIP Angelo Cammarata
How old will you be in heaven?
Will eternity seem like an eternity?


Will getting a harp help me get into heaven?

Email ThisBlogThis!Share to TwitterShare to FacebookShare to Pinterest
Labels: bartenders, Ed Guidas, hats in heaven, Mr. Toad's Greensburg, Tribune-Review, Use All The Crayons!