The T-Shirt I inadvertently inspired 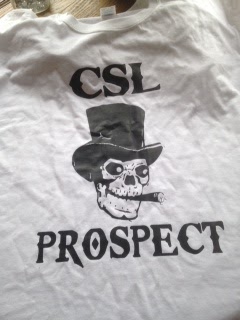 It is audacious, I admit, but I believe a lot of the things I write belong on posters, coffee mugs and T-Shirts for inspirational purposes.
Things like:
Enjoy being human and enjoy human beings
Anytime you hear of anyone dying suddenly it ought to reinforce the need to always be living suddenly
And . . .
A mohawk is an eccentric haircut. A MoeHawk is an irrationally angry bird that inflicts cartoon violence on a CurlyHawk.
You know, stuff for the ages.
What happened this week is an example of being careful for what you wish. Because something I’d written is now on a T-Shirt.
And it’s being mass produced.
By mass produced, I mean there are eight of them. That may not seem like much, but given that all but three of them are size Triple XL, I think it qualifies. Either way, it’s a whole lot of fabric.
On the front are cool top-hat wearing skulls with cigars clenched between their ivories. It'd make a dandy prison tattoo.
On seven of them is written “MEMBER.” On the eighth, “PROSPECT.”
Mine is the latter.
On each is the initials for the phrase I now regret coining.
It is CSL. It stands for “Cigar Smoking Lout.”
It’s an offhand line I wrote in an offhand variety post in what can be considered an offhand career. In fact, my entire existence is so entirely offhand it’s surprising I’m physically capable of typing.
Yet, it has become legend.
I was writing (link below) about how I skipped a big cigar smoker night to stay in with my family and watch the “Survivor” finale.
Here’s the exact paragraph:
“My friends think I spend too much time with my family. My family thinks I spend too much time with cigar-smoking louts. I’m at a point in my life where every decision I make is bound to make at least half of the people who know and love me think I’m a perfect jackass.”

They’re my friends, sure, but I defy anyone who sees us out smoking cigars and drinking hootch to paint a more accurate picture.

It ain’t no GQ photo shoot.

And that’s a big part of what I love about it.

Unless you’ve absorbed the song, the lyric might confuse. It’s describing an evening, not an action.

In fact, if anyone asks what I do on my nights out with the CSL it is “laugh and joke and drink and smoke.”

It’s just what we do. I’m sure you do something similar anytime you’re out with good friends.

I just never dreamed it would lead to something emblazoned on a white T-Shirt for posterity, or until I inadvertently drizzle some mustard down the front making the shirt unpresentable in public.

So now next time we go out for the monthly DiSalvo’s Station smoker it’s planned for us all to wear our CSL shirts.

People will notice. People will ask. We’ll explain. I’ll smile politely. I’ll be horrified by the attention. And I’ll reveal that mine says “PROSPECT” because the “MEMBERS” do not yet deem me worthy of the club I unwittingly had a hand in naming.

Or as Val, my ever-supportive wife, said, “It’ll be like you’re back in high school again and having to worry that the cool kids might beat you up.”

(That never happened, by the way. I WAS the cool kid).

And all the while I’ll be wishing I’d earned such sartorial renown for something more profound, more cerebral, more deft.

If fans of the Grateful Dead are called Deadheads, what does that make those of us who revere Moby-Dick?

Put that on your T-Shirt and smoke it.

Random thoughts on Letterman, Survivor & being the weenie