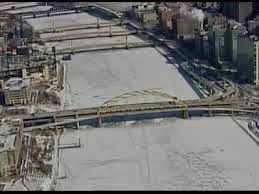 A Pittsburgh burglary suspect’s daring escape attempt has me recollecting all the questionable adventures I’ve had on frozen bodies of water.

Running from the police isn’t among them.

William McManus, 25, is alleged to have ripped off armfuls of scratch-off lottery tickets from a downtown convenience store.

I say “alleged” because I remember being instructed in journalism school it’s the until-proven-guilty fair designation and because I don’t want to disqualify myself from potential jury duty.

Case details sound fascinating and I’m in one of those periodic slumps where the $12-a-day jury duty compensation would seem like a gaudy windfall.

McManus has a history of petty thievery. Confronted by police with a coat full of stolen lottery tickets, he certainly considered the consequences if caught and convicted.

It’s a choice all criminals face when nearing apprehension: Surrender, fight or flight.

The moment was immortalized in the 1971 “Dirty Harry” movie when Det. Harry Callahan asks the suspect about his intentions as he lay bleeding on the sidewalk.

“I know what you’re thinking,” Callahan says, “‘Did he fire six shots or only five?’ Well, to tell you the truth in all this excitement, I kind of lost track myself. But being this is a .44 Magnum, the most powerful handgun in the world and would probably blow your head clean off, you’ve got to ask yourself one question: ‘Do I feel lucky?’

This, I think, should be part of every suspect’s Miranda Rights.

I’d like to think if the question was posed in that way to McManus, he’d have had the pluck to respond, “I’ve got about a hundred lottery tickets in my coat. Of course I feel lucky!”

Either way, McManus took off.

But he didn’t run to a getaway car or down some dark alley.

He ran straight to the Allegheny River.

Oh, the exhilaration he must have felt because the Allegheny River is frozen solid.

I wonder if he felt like Princess Elsa does when she builds the magical ice bridge across the chasm. He must have been congratulating himself on his genius.

His midnight escape was not without risks. I know this because I once fell through a pond that looked frozen.

I was playing golf.

It was a warm early spring day. The fairways were clear, but the ponds were still frozen, or so it seemed.

Knowing this, I cunningly tried to gain an advantage by skipping my ball off the ice on a dogleg par 5.

The ball came to rest in the middle of the pond. As the match was tight, I didn’t want to lose a stroke so I gingerly crept out on to the ice and took a mighty whack.

I made good contact, but the commotion caused my back leg to break through the ice up to my knee. I was very lucky.

Had both legs broken through I might have been soaked clear up to my waist and forced to miss post-round drinks. I learned that day it’s a very shallow pond.

I was so much younger then. More reckless. Just a stupid kid, really.

Probably the closest I ever came to truly dying was in 2000. I was doing a story about the ice fishing on Mille Lacs, Minnesota. It’s a 207-square-mile lake that every year freezes solid enough to sustain a population of ice fisherman big enough to qualify as the state’s third largest city. There’s roads, regular trash pick up, pizza delivery — you name it — all on a 3-foot bed of ice.

The problem is vast parts of it are unsafe.

The first thing I did was unwittingly drive my rent-a-car on one of the unsafe parts and begin doing donuts. I was having a great time until I spied a concerned citizen dashing out on the ice waving his arms. He told two or three fools die every year doing what I was doing.

He’d saved my life. Then he took me to a nearby pub and bought me a beer.

I still send him a Christmas card every year. Some years it’s for saving my life, some years for buying me the beer.

Those are my two best on-ice adventures.

I’m sure the fleeing McManus thought he was going to have a dandy story. Maybe he thought once he’d made it safely across the river, he was home free.

Because the Allegheny River isn’t an international border.

And in another miscalculation, he forgot there are Pittsburgh Police on both sides of every Pittsburgh river.

In fact, if I’m reading the story right, the officers who’d tried to arrest him on the river’s downtown side simply got in their cruiser, drove across one of our many bridges and were waiting for him as the suspect scampered up the river bank.

Still, I don’t believe the escape was in vain.

A crafty attorney can certainly get the resisting arrest charge dismissed.

After all, McManus in a way obeyed when the officers yelled, “Freeze!”

We’ve been freezing in Pittsburgh all month.

I had the right to remain silent: arrested again