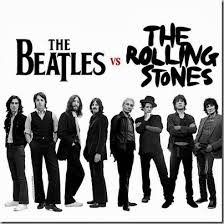 My daughters know not to ask Daddy any homework questions involving subjects like algebra or biology.
I just don’t get it.
Same goes for humanity, sociology, civics, nutrition, astronomy, horticultural, automotive repair, personal finance, IT, physics, chemistry, fashion, hospitality, theology …
And let’s not even get into why they know to run to Mommy anytime they have questions involving basic grooming and hygiene.
So I was taken aback when our 9th grader approached and said she needed my insights on a subject she’d been assigned to argue for debate class.
Who’s better: Stones or Beatles?
Now, it was my turn to be taken aback.
This is what they’re teaching in our middle schools?
I couldn’t believe it. This isn’t a subject that ought to be discussed in a classroom.
It ought to be discussed in a dimly-lit bar with a really cool jukebox.
And I should be the teacher!
In fact, my entire life has been something of an honors tutorial on the subject. I remember spending hour-after-hour in the Athens bars going point-by-point over every song in their glorious catalogs to divine the answer.
It was Ohio University where I graduated with a .23.
That wasn’t my GPA.
It was my BAC.
I started my answer with a question: Who did you choose to argue: Stones or Beatles?
“The Stones.”
Hallelujah.
If she’s learned anything from me it is musical tastefulness, a realm which to me is far more important than all that scholarly crap that winds up on the resumes.
She was correct.
The Stones are the better band.
I plugged a Stones playlist into the stereo and as the first iconic chords of “Jumpin' Jack Flash” began to play I commenced my illumination.
“First of all, the Stones are the better band merely on the basis of longevity. They’ve been thrilling the world for 54 years.”
That cannot be overlooked.
“Brown Sugar,” “Wild Horses,” “Shattered,” “Sweet Virginia,” “Memory Motel,” “Miss You,” “It’s Only Rock ’n’ Roll,” “Waiting on a Friend” and “Honky Tonk Woman” are just a handful of the hits the Stones recorded after the Beatles hung it up. And if I had the opportunity, I’d play for each of you the outstanding 2005 “A Bigger Bang” album to prove the Stones are still in their fifth decade capable of great studio work.
Many great bands burn out or fade away within five years due to ego, addiction, artistic differences, death, suicide, envy or the other many pitfalls of fame.
The Stones have overcome all those and reign still.
Second, the Stones are more inspirational.
Ask Bruce Springsteen.
I heard an apt interview with him where he summed it up perfectly. He said it changed his world when he saw the Beatles on Ed Sullivan.
“I remember looking at them and thinking, well, there’s only four guys in the world who can do what they’re doing and there they are. No one else can do that. Me, included. But when I saw the Stones they were more gritty, more real. They weren’t smiling. They weren’t pretty. I thought, man, I can do that. The Stones are what made me want to be in a band.”
Every musician in the world wanted to listen to the Beatles, but they wanted to be a Stone.
Another point: the Stones were dangerous.
When the Beatles were playing it safe singing, “All You Need is Love,” the Stones were releasing, “Sympathy for the Devil.”
I played it for Josie and emphasized the lyrics with historical context about crucifixions, Russian revolutionaries and WWII holocausts.
I watched with glee while your kings and queens fought for 10 decades for the gods they made
I shouted out “Who killed the Kennedys?” when after all it was you and me
The world in 1968 was raw from war, strife, injustice and the monumental assassinations of JFK and Martin Luther King Jr. And here comes Mick Jagger beseeching sympathy for the devil.
They didn’t shy away from confronting this. In fact, when Robert Kennedy was murdered during the recording sessions, the Stones had a historic choice to remove the Kennedy line in the name of taste.
Instead, they made it plural.
Even today, it’s incredibly incendiary.
I told her the Stones are the better band is because they are a true band.
I love that about them.
I contend if the Beatles had never met you still would have heard of John, Paul, George and Ringo. They all had the gifts to be famous.
John, Paul and George all went on to individually make tremendous and indelible solo music. They were a trio of geniuses.
And Ringo, well, Ringo would have made a dandy game show host.
Had the Stones never met, the only one anyone would have ever heard of is Charlie Watts and the only people who would have heard of him are the handful of obsessives who can name famous jazz drummers.
Mick would have become a financier, Keith a junkie, Bill Wyman a gynecologist and Brian Jones still dead.
Instead, they had each other and became something the world will never see again.
That Stones solo work is either obscure or sucks just bolsters my point.
And though their lifestyles contradict the opinion, I contend the Stones would to this day still be playing music together in shabby clubs and theaters if they’d never become famous.
I still believe — despite all the inflatable dolls, the private jets and the disposable supermodels — with the Stones it’s the music that matters.
And because this was a school project and I want my darling to succeed, I needed to share with her the one irrefutable reason that would blow away anyone arguing the Beatles — and I love the Beatles — are better.
None of the Stones ever got anywhere near Yoko.
Class dismissed.

Related …
Roll on, Stones
Stones 50 best? ForGrrrt it
“USA! USA!” and why we all whoo
Listening to classic rock with my senile Mom
Lennon vs. McCartney
The divisive Paul McCartney Christmas song
The Boss for God