How much did I hate "Revenant?" Worse than winter 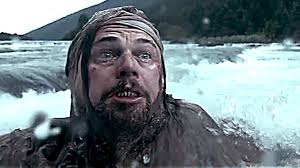 I used to think the longest winter was 2010 because it lasted from Halloween through near Easter.
I was mistaken.
The longest winter lasted 2 hours and 36 minutes.
Yes, me and some buddies went to see “The Revenant.”
I hated it.
It’s like the producers fully embraced the maxim that revenge is a dish best served cold, like below-zero/frost-bit/snot-dripping-from-the-unruly-mustache cold.
It dragged on for so long my buddy speculated aloud that pitchers and catchers were bound to soon report.
It was so bad it made me grateful when it finally, mercifully ended so I could go outdoors and get smacked in the face with actual winter.
Worse, now I’ll forever relate true winter with “Revenant” winter.
For instance, we’re still digging out from about two feet of snow from the weekend blizzard.
And, God help me, I’m finding charming things to say about real winter.
This was the weekend we go on our annual Rodell Winter Escape.
It’s not to Disney, Key West or someplace graced with two-digit highs.
No, we go to Sharon, Pennsylvania, which is about 90 minutes north of Pittsburgh. Been doing it for about eight years.
Now, bar aficionados will understand immediately why we go to Sharon. It’s the home of Quaker Steak & Lube, one of the finest bar restaurants in Pennsylvania. It’s been there since 1974. There are now 53 locations in nine states (one in Toronto), but none of them have the heirloom charm of the original.
I used to road trip there with buddies and then with Val before kids.
Then one day about eight years ago after a long drive we needed to overnight and Sharon seemed logical. We happened to pull into a Holiday Inn Express!
Now, many of you are aware of my travel writing bona fides. I’ve guested at The Breakers, The Greenbrier and many of North America’s finest resorts.
In short, I ain’t no hick.
But on that day, the H.I.E. near Sharon took a back seat to none. The staff was friendly, they had a happy hour wine bar and a chocolate fondue fountain in the lobby — they were cheap!
And they had an indoor pool.
For road-weary parents of two little girls, it was perfect.
So we made it a winter tradition to go to Sharon. The girls shop at Grove City Outlets on the way up, we swim, get a pizza delivered (it’s part of a hotel stay package) and then on Saturday go to The Lube for a wing feast.
We’ve had the girls at some swanky joints, yes, but I’ll wager they’ll remember our Sharon nights as fondly and warmly as any.
Or not warmly.
Because we always try and time the weekend to the worst weather. It makes enjoying the in-door pool that much more fun.
Turns out we were about 40 miles from having one of our best weekends be one of the worst.
That’s how far we were from being stuck for 30 hours on the Pennsylvania Turnpike.
I can’t imagine how my family would have reacted had we been marooned with 500 other motorists in the blizzard that shutdown the ‘pike.
Stories of heroism and cowardice continue to emerge. People shared provisions and warmth and held kangaroo courts when panicky motorists endangered others with escape attempts. I won’t be surprised if we hear reports of ketchup and cannibalism.
Now, that’s a movie I’d love to see.
As it was, I’m immensely relieved we missed the part of the storm that caused so much misery to so many.
We made it home safely and I got to spend the rest of the weekend alternately frolicking in the winter wonderland with our daughters and shoveling about two-feet of snow from about 350 feet of driveway.
Truly, this morning I’m feeling like Hercules, only Hercules high on Advil.
I didn’t think I could do it. There was just too much snow. In fact, I told Val, “I don’t think I can do it.”
She burst out laughing. I’m still uncertain whether the laughter was her way of saying, hon, I know you can do it or her way of saying, hon, you have no choice but to do it.
Either way, I did it.
And it was hell. I hated every second of it. It was more misery than a mortal man should have to endure.
Still not as bad as having to sit through “The Revenant!”

Related . . .
Winter’s over; Keith heads south
How my facial hair determines winter’s over
Impatient to be outdoors and dancing in my underwear
In praise of, yikes, winter?
Of mallbergs, fenderdung & made-up winter words