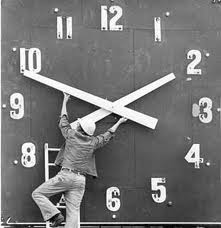 Welcome to maybe my favorite day of the year! I so enjoy turning the clocks back that in 2010, I wrote this post about how our lives could improve if we turned them back just a little bit each week. This one's included as one of the 33 essays in my book, so I feel particularly paternalistic toward it. Hope you enjoy it and, as always, tell friends about www.EightDaysToAmish.com whenever you find it worthy.


I love this turn back the clock thing so much, I wish we could do it once a week. The cool thing about this is in 20 years, we’d only be about 18 years older.
Yes, Daylight Savings Time slows aging. But only by one hour.
If we did it once a week or maybe one minute per hour, we could live to be 175 years old.
I see many benefits. Gas prices would rise more slowly. Happy Hour would be Happy 61 Minutes (and generous bar owners would feel obliged to round up). And the timeless game of baseball would seem endless.
Well, that baseball part would remain unchanged to those who underappreciate its nuance.
We’ve never used “Time Out” as a disciplinary tactic. I guess it works for some, but it’s too early to discern the long-term effects.
For instance, when this generation of misbehaving children grows up and starts attending college and professional sports, will they depart the arenas and en masse head for a quiet corner whenever a referee whistles, “Time Out!”
Again with baseball, it used to be popular for teams to have “Turn Back the Clock Day,” when teams would dress in bygone uniforms and sell things like soda and popcorn for a buck and a quarter.
It was great fun and we thought it would be wonderful if the whole city complied. So if you had a “Turn Back the Clock Day” to say 1929, beer citywide would be a nickel and commuters would have to find horses to ride to work.
I guess I’d like to turn back the clock to the 1950s when it seemed like it must have been a really great time to be a white male who liked to drink. That would have worked for me better than say if I were a black male who liked to vote.
So I’m pretty comfortable with our times. Despite all our many upheavals and daily doom in the headlines, I’m optimistic about the future. I’m just not in that big of a hurry to have it come rushing up on us so quickly.
The exception, of course, being the year 2020 when my enduring insistence that 2020 will be a great year for visionaries is likely to finally gain marketing traction.
A friend of mine once said time is man’s worst invention. It’s very profound. As I’m becoming more conspiracy minded the older I get, I must conclude the concept of time was conceived by the guy who’d invented the first clock but couldn’t find a use for it.
So, voila, time! Now, if you have one fussbucket with a time piece then everyone needs one.
I say to hell with time. Let’s all just show up whenever we feel like it. And bring a book.
I have three watches I adore: one from my late grandfather; an Elvis one from my good buddy Quinn: and a really snazzy one generously gifted to me from a Las Vegas resort for work that didn’t warrant the bauble. They gave one to Val, too.
It was the oddest thing. We were there on an assignment for a now-defunct magazine. The magazines I’ve worked for that can now be described as now-defunct are too numerous to name.
But we were on a fancy lake cruise outside of town and our host presented us with two boxes from an elegant jeweler. Inside were these fabulous watches.
I said, no, we couldn’t. It wouldn’t be ethical.
As I was saying this, I was admiring the watch was on my wrist and thinking, “It’s a tad too snug, but I saw a jeweler in the casino. I’ll bet he’ll size it for free.”
I was correct.
Ethical considerations be damned, there was no way I was leaving Las Vegas without that watch. It’s magnificent.
To this day, Val still thinks some husky guy is going to show up at our door and tell us we need to kill Vinny or he’s taking back the watches.
I know this much: Val will kill Vinny. She loves that watch. Me, too.
But one of these days I’m thinking of making all three timepieces obsolete.
I’m thinking of getting a $75 tattoo of an $18,000 Rolex for my left wrist.
It’ll be waterproof, impressive in refined company, and will make even the wafer thin models look clunky by comparison.
I’ll do it one of these days, I swear.
I just need to find the time.

Email ThisBlogThis!Share to TwitterShare to FacebookShare to Pinterest
Labels: Eight Days To Amish, turn the clocks back more often, Use All The Crayons, why daylight savings time, wrist watch tattoos