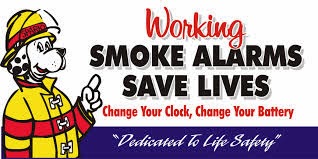 (534 words)
I suspect many prudent Americans today will instinctively change the batteries on the home smoke alarms, cued as we are to change them on the days we turn the clocks back.

I’m going to do them all one better.

Yes, I’m going to have a family fire drill!

The fire drill is an old school staple.

Ding! Ding! Ding! Everybody line up and march in orderly rows to stand out on the sidewalk and make zoo faces at the passing motorists.

It’s a good idea, although I never once was in a school when an actual fire caused an evacuation.

But I have been at home several times when they’ve caught fire.

The worst was the 2007 chimney fire in our old house. I was home alone eating some spicy General Tso chicken in front of the fireplace. It was three days before we were moving from the home where we’d lived for 15 years.

I knew to never ever use the fireplace for trash disposal purposes, but I figured we’d be gone in three days so what the hell? I chucked the empty container into the fire.

For some reason, the spicy trash touched off a chimney fire. It sounded like a tornado had touched down. My efforts to stem the spreading blaze were all in vain, so I jumped on the phone and dialed 911.

Within about four minutes three fire trucks with a dozen firefighters were parked on our lawn.

About five minutes after that, Val and Josie pulled up to see flames shooting out the chimney of the house we were polishing for buyers.

I’ll never forget the grilling the insurance investigator gave me. I’m glad it wasn’t one of those frequent situations where out of either boredom or self-preservation I felt the need to lie.

Val hasn’t left me home alone ever since.

Me, I’ve stopped putting Chinese food in the fireplace to keep flames from shooting up out the chimney, but remain unable to resist the urge to keep on occasion putting it down my throat, a nutritionally unwise move that sometimes causes flames to shoot out of other places.

Our new home is, to me, a fire hazard. It’s made of wood and has two fireplaces, one of which Val likes to for aesthetic reasons keep casually screened.

So I’ve always wanted to have a fire drill and today’s the day.

I encourage you to do the same.

See, all a smoke alarm does is lets you know when it’s time to panic and panic is the enemy of reason.

I intend to propose several hazardous scenarios where everyone will know what to do if the smoke alarm goes off and we detect flames in, say, the living room, the kitchen, the basement, etc.

This one grabs the fire extinguisher (and we’re checking their functionality today, too), that one calls 911, the littlest one grabs the low-priority stupid dog. Me, I grab my golf clubs and just run like hell to the nearest tavern.

Indeed, panic is the enemy of reason and me being safe with my golf clubs in a friendly bar is a perfectly reasonable response to domestic danger.

Norwegian hit TV up in smoke
Posted by Chris Rodell at 11:47 AM