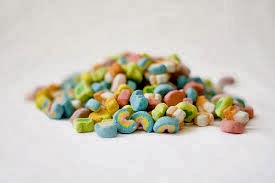 (743 words)
I wonder what we’re going to do with all that excess trans fat and if it’s too late to make it irresistible to insects like bed bugs.

I’m one of those guys who never paid too much attention to trans fats because I have a simple view of nutrition: the more fancy the packaging the more likely it’d be unwise for me to put what’s inside it inside me.

Take Lucky Charms. I’ve loved them ever since I was a kid.

To be accurate, I’ve loved about one quarter of them since I was a kid. Yes, I love the marshmallow part and disdain the frosted toasted oat they use as marginally nutritious decoys.

I’m what you call a Lucky Charms prospector. I pour a big bowl, add milk and then with surgical skill begin to scoop out all brown turd-like oats and hustle them down the gullet as quickly as possible.

After about seven or eight minutes of tasteless cereal, I have -- voila! -- an entire island of magically delicious charms clinging together in a ocean of milk.

Then begins the feast. I take hearty spoonfuls dripping with the treats. When they’ve been decimated, I guzzle the candy-flavored milk and repeat the whole process maybe two more times.

Now, I know that’s not healthy. That’s why I only buy Lucky Charms for breakfast about as often as we tinker with the hour hand on the clocks.

Out of the cereal are bursting three silver-dollar sized rainbow marshmallows each riding rainbow waves exploding out of a milk-splashed bowl. Observing this candy euphoria is the chipper little leprechaun who’s seen only from the waist up because, I guess, General Mills executives figure it wouldn’t help sell cereal if they treated us all to his leprechaun erection pup-tenting his knickers.

You never see this kind of packaging promoting the carrots.

That’s because healthy eaters know we need to eat fruits and vegetables to stay fit.

I typically eat fruit for breakfast and a big salad for lunch along with soup, a sandwich or a piece of fish. Dinner’s often a family crap shoot. Val’s very scrupulous about healthy options, but like many go-go American families we’d get docked for the occasional pizza or frozen dinners.

What’s the least appealing consumption of my day?

It’s by far the salad.

I enjoy my fruit, but all you need to know about salad is they make salad dressings to choke it all down.

But I grudgingly eat it -- usually without dressing -- because I know it’s good for me.

Where I differ from more staunch nutritionally-minded folk is I try and make sure each day I consume at least one or two portions of things I know are bad for me.

See, people who eat healthy do so because they want to make sure they live right.

I eat my share of chocolate, Fritos, candy corn and other refugees from the grocery store crap food aisle because I want to sure I die right.

Too many people eat right because they want to extend their lives.

I eat wrong because the years that others are adding are the ones I don’t want to live.

I’d like to live to be about 80, but dread the thought of living to be about 84. I’ve seen too many old-timers complain about what a bitter hell those last four years are. Saw it with my grandfather, who lived to be 97 and spent the last 10 years of his life praying nightly he’d die.

My own father died at 76. He was fine in the morning and gone by dinner, victim of an aortic embolism. That was one tough night, but in hindsight it was beautiful.

I don’t know if trans fats cause aortic embolism, but if they do then I think they should be prescribed in what I guess you’d paradoxically call healthy doses.

I read a list of things that will be less tasty when deprived of their trans fats. The list included donuts, frozen pizza, movie theatre and microwave popcorn, coffee creamer and canned frosting.

For whom are those items daily staples?

Reducing my consumption of any of those items isn’t going to kill me.

I’ll just have to find something else that eventually will.

Long live the spork (and me)!

Dining on dino’s to end world hunger
Posted by Chris Rodell at 12:54 PM