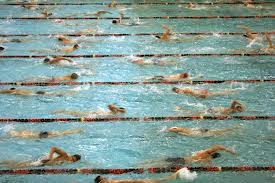 (802 words)
Concerned friends are asking me how I’m coping. They want to know if what I predicted would be one of the worst things that ever happened to me is as bad as I pessimistically thought it would be.

I tell them I was mistaken.

I’m never near the water, but I feel like I’m the one that’s drowning.

Saturday the team is scheduled to have a meet that starts at 9 a.m. and is expected to grind on until almost 2 p.m.

And this is one of the more convenient ones.

Most of them have been from 4 to about 9 p.m. on Saturday, times when I’m conditioned by cheerful habit to be to be in my jammies in front of the fire engrossed in college football and Kentucky bourbon.

Instead, I’m up at the swim meet. In street clothes. Sober.

It takes a brave father these days to admit he detests having to attend one of his daughter’s school events. That makes me eligible for service medals.

Or maybe The Black ‘n’ Blue Butt. Those cramped bench seats are a real pain in the ass.

Let me make this clear: I adore my daughter and will happily stare at her for days on end just to savor every observable detail of a life that is flying by faster than Michael Phelps in the 200 meter butterfly.

That’s why I enjoy taking her to practice three or four nights a week from 5:30 to 6:30 p.m. and would never dream of complaining (even though that time cruelly conflicts with the heart of the Happy Hour where I know all the boys are crestfallen whenever I’m not there).

When she’s practicing I can take a book and spread out in the uncrowded stands. I glance at the book, but most of the time I’m watching my first born swim. It’s magical.

I love that she’s part of a team. I love watching her encourage her teammates and learn a discipline that could help keep her fit and competitive her whole life.

And I love that I can do all that in 60 jiffy minutes, and that she’s involved the entire time.

That’s about what it was like when my old man took me to play youth hockey. Games lasted about an hour and I was on the ice about half the time.

It’s not at all that way with the marathon meets.

These team meets can last nearly five hours, involve as many as 75 six-lane individual heats and a cast of thousands.

My daughter is in three of them. Three!

And she’s in the water for maybe four minutes.

That means I have a vested interest in her swimming more slowly so I’d get to see her more. But that’s not the way swim meets work. I need to encourage her to go faster! Faster! Faster!

So the more she improves, the less I’ll get to see her swim.

But the event leaves me plenty of time to observe other parents and I can only include that some of them have been sniffing chlorinated water for so long that it’s damaged their ability to think logically.

It might be, too, if any of the kids were capable of swimming with their ears above the water line.

And while I adore my children, I confess I’m mostly indifferent to everyone else’s.

Don’t get me wrong. I don’t want to see any of them sink to the bottom of the pool when they jump in the water, but observing them splash around in the pool just isn’t one of my priorities on Saturday evenings.

I’m not offended if you feel the same way about the success of my darling daughters, as idiotic as that concept may be.

Yes, it takes a village, but the chief gets to prioritize who gets served first in our own teepees.

Worst of all, this conceivably could be part of my life for the next six years, 15 if her 7-year-old sister follows in her fin steps.

I’m not sure I can take it.

Happily, on Saturday I won’t have to. I’ve been invited to a Barnes & Noble-sponsored book signing at the Carnegie Free Library in Connellsville from 11 a.m. to 4 p.m.

It’s the book that contains large passages that have caused many readers to surmise I’m a wise and loving father.

If they only knew.

I guess when you’re a pool parent that sort of comes with the territory.