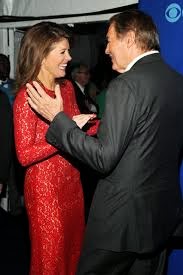 (803 words)
I’m considering a drastic change in my morning routine. See, I usually get up at 6 a.m. and stumble to my office to spend the first couple of hours writing one of these blogs.

I may soon put off any writing until 8 a.m. so I can stay home and watch “CBS This Morning.”

Why risk train-wrecking a custom that seems to be working?

I guess I’m just too romantic for my own good.

Yes, Charlie and Norah are in love!

That would be “CBS This Morning” hosts Charlie Rose and Norah O’Donnell.

Morning news is a hard habit to break. I stayed with NBC’s “Today” show until it became insufferable. I broke free right about the time when the Ann Curry drama was at full boil.

See, I’m a news junkie. I love to know what’s going on in the world. With “Today,”  that used to be about an hour or so of credible reporting and interviews with newsmakers.

Then they saw ABC’s “Good Morning America” succeeding by becoming a sort of soap opera sprinkled with little bits of floating news confetti. I’d watch that show when I’d visit my mother -- and I’m convinced their target audience is senior citizens with mild dementia -- and be repelled by the pathos, the giggling and party atmosphere.

It was like watching “iCarly” on the Disney Channel only if it occasionally guest starred folks like Benjamin Netanyahu and Honey Boo Boo.

So “Today” began to tinker with its format by cramming all the tedious news into about 12 slim minutes. The next step was convincing Matt Lauer, Savannah Guthrie and human chuckle machine Al Roker they were no longer mere news personalities.

They’d been told the key to sustaining their multi-million dollar incomes was they needed to act as if they liked each other.

Really, really liked each other.

They were told morning show on-camera chemistry was essential to engaging today’s viewers. But it’s the kind of chemistry that can’t be concocted in a lab.

So, fed up, I decided to give CBS a shot. They were at the time promoting the morning show as straight news featuring the reliably likable Rose with the appealing Erica Hill. They had a crackerjack team of reporters and I found it very satisfying.

Then one day last year I tuned in to see Hill had been replaced by the vivacious O’Donnell. She’s beautiful. A married mother of three (with twins), she combines poise, competence, wit and warmth.

I enjoyed the contrast when the camera would swing from the luminescent O’Donnell, 39, over to Rose, a rumpled gent with eyelids so droopy he’s begun to resemble hungover basset hounds.

And it was all just news -- insightful, crisp, glorious news free of any political slant or mood-souring commentary.

Then one day I was electrified to see the two engage in a wonderfully human moment.

As they were breaking for commercial, O’Donnell stood up, leaned over and cupped her hand around Rose’s ear to whisper something so risque she didn’t dare let anyone else hear.

What she said, I can not imagine. I like to think it was something filthy.

But Rose’s reaction was euphoric. His head flew back, his jaw dropped and his eyebrows shot up so far I thought they were going to launch off his face. And he began to roar with laughter.

She had caught him completely off guard with something so funny I had to stick around through the commercial to see if he could compose himself (he did).

I thought, man, these two really like each other.

So I began watching more frequently. Sure, I still enjoy the news, but the romantic in me had to begin charting where the relationship was heading.

I swear, I think it’s to the altar.

These two playful kids are now crazy in love.

Last week, I was watching and O’Donnell couldn’t keep her hands off Rose, who’s been divorced since 1980. She’s always reaching across the desk to touch his arm. They crack each other up, share caring little glances and radiate the sizzling kind of chemistry reality-show producers pray develops between their moronic contestants.

And unlike the distasteful “Today” show fiasco involving Curry, what’s happening with Charlie and Norah is all about love! Love! Love!

Watching these two people in this often stilted situation make each other so happy is making me happy.

If these two keep clicking the way they are, I imagine one day Norah will take a leave to save her family while Charlie will gallantly say he only wants what’s best for the fair Norah.

Rumors will begin to swirl that the two are in love. It’s a story that will certainly make the news.

I swear, it’s already making it for me.

Darieth, don’t go! When a local news lovely leaves
Posted by Chris Rodell at 11:21 AM

Email ThisBlogThis!Share to TwitterShare to FacebookShare to Pinterest
Labels: Ann Curry fiasco, CBS This Morning, Charlie Rose and Norah O'Donnell are in love, Matt and Ann hate each other, Norah O'Donnell is hot