Is beer-fed turkey for the birds? 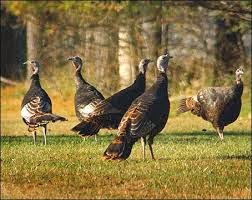 I guess it’s another triumph for relentless beer shills that Thanksgiving has somehow become what many consider a drinking man’s holiday.

Many of my friends have told me they are looking forward to a big meal followed by a day of binge drinking and watching hours and hours of professional football.

I’ve never felt that way about Thanksgiving. I love the big meal, but would often rather watch a good family movie with the kids than get drunk and watch two teams I don’t care about playing a game that’s becoming increasingly boring to me.

This is another example of how I’m way out of step with the mainstream American male.

Heck, just last week I learned I’m out of step with an increasing number of mainstream American turkeys.

It turns out even the turkeys are getting drunk for Thanksgiving.

That’s not all. They’re getting drunk all year round.

I saw a news story about Joe Morette’s Henniker, N.H., turkey farm. He’s been feeding his turkeys beer since 1993 when he serendipitously spilled a brew and noticed the turkeys enthusiastically gobbling it all up. Of course, you could say that about anything turkeys consume.

Gobbling is just what turkeys do.

But Morette swears the beer makes the birds fatter and more flavorful.

I can generally attest to half of that. I’m friends with many men who’ve been guzzling beer since at least 1993 and they aren’t the least bit bony.

I don’t know how they taste and it’ll take me being on the losing end of the zombie apocalypse before there’s even a chance I’ll find out. That may not happen even then. I’m sure even as a zombie, I’d be a pretty picky eater.

PETA, of course, says it’s cruel to give the birds so much beer.

I wonder if PETA would protest if Dave, the owner of The Pond, started giving us regulars free beer.

I read the whole story hoping to learn what kind of beer the turkeys prefer. That would be very important to me.

I’d be impressed if the turkeys took to Heineken, Bass or LaBatt’s, three of my favorite imports.

As far as domestics go, the closer to home the more impressed I am. So I’d take any turkey that drinks Duquesne, Yuengling or Straub. Penn Brewing in Pittsburgh makes some great beers and I think a bird that had spent a couple years of drinking Penn Pilsner would be delicious.

Anything would be preferable to those beer-colored waters the national brewers are always scheming to shove down our throats with stupid “fast-pour” bottles and cans.

Me, I spent yesterday brining our turkey. Brining is an overnight soaking technique that infuses each bird with with moist flavors. I used to use a recipe that included vegetable stock, sugar, salt, rosemary, sage, thyme and water.

It did the job, but it didn’t have any zing that made it special.

This year, Val got a good brine recipe from a friend that included bay leaves, peppercorns, sugar and kosher salt.

I took that and then commenced to freestyling. It may be politically incorrect to say so, but on this Thanksgiving I sort of went off the reservation.

I added heaping mounds of fresh rosemary, marjoram, basil, and thyme along dripping dollops of honey to the water-based brine.

Then, with Morette as my inspiration, I began to consider a booze option.

Beer was too pedestrian. I didn’t think wine would work either.

I needed something more assertive, something robust yet graceful.

So I took a shot and enjoyed it so much I figured the turkey did, too!

And not just any bourbon. Yes, on this Thanksgiving, I bathed our farm-raised turkey with something that would certainly tickle its feathered soul.

I gave our turkey Wild Turkey.

And it’s the premium stuff, the delicious Rare Breed. It’s pricey, but worth it for a refined gent like myself.

I’ll let you know if the bird turns out to be as tasteful as the man who brined it.

Talkin’ turkey (the Republic of)
Posted by Chris Rodell at 11:20 AM