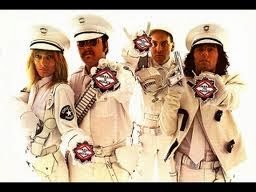 (726 words)
I dreamt about an old buddy of mine the other night and the dream was so vivid I felt like calling him up the next morning.

I didn’t because I thought me telling another guy I’d dreamt about him would have been creepy.

And it would have been, especially if I’d told him about what happened in the dream.

The two of us were road tripping in some convertible. It was a big, cherry red Cadillac. We were sipping beers and cranking tunes as we drove along the sun-splashed dunes.

Nothing wrong with any of that. We both had all our clothes on and in dreams you can still drink and drive without having to worry about getting pulled over by what I guess the band Cheap Trick called the Dream Police.

What was creepy is we’d stop at these road side carnivals and they all had tent shows and at every one we’d get out and I’d go in and there’d be some naked old babe in a bed beckoning me to join her.

And dream me, bless his heart, jumped right on in.

In real life, I gallantly help old ladies cross the street. In my dreams, I jump into bed with them and screw ‘em giddy.

I’d look back and my buddy would be sitting there with his beer, smiling and encouraging me. He’d wink and give me the thumb’s up.

Then I’d bid them each a fond adieu and me and my buddy would drive down the beach to the next tent show where the same thing happened all over again.

Then I woke up.

What would some dream analyst say about all that?

How much of our dreams are a wish and how much are just a dream?

I’d love to spend a day driving up and down the coast playing tunes and drinking beer with my old friend. That would be a blast. We’ve done it before and I hope we one day we get to do it again.

You could say it’s a dream of mine.

But that part about bedding a bunch of willing Betty Whites? Where’d that come from?

I wonder if my inner me is getting even for all the pranks I used to play on an old bartender who fancied he had a layman’s gift for dream analysis.

He believed he knew precisely what it meant if you dreamt of bowls of fruit, schools of fish, long-barreled firearms or trains going through tunnels, etc.

And it all meant you were really dreaming about sex.

He was maybe history’s only Freudian bartender.

He believed a friend of ours was thinking of leaving his family because he had the hots for some cute waitress.

I told him the guy told me he’d dreamed he and this girl had been riding ponies on the beach and the two of them were waving to his family who were out in a storm-tossed boat and that a killer whale was circling the boat and that the whale was wearing a sombrero.

I concluded the story, as I always did, saying our buddy told me if I told the bartender about the dream he’d deny it.

And deny it he did, thus confirming to the bartender my story’s authenticity.

It was all very entertaining.

I’m sure one reason every dream aspect held some relation to sex was because sex was about all this elderly bartender thought. Even in his 80s, calling him a dirty old man didn’t do him justice.

He was downright filthy. He died a few years back. I still miss him.

I’ll never forget the times he’d either outrage or delight much younger women by telling them that while he could no longer cut the mustard he was still more than capable of licking the jar.

I wonder what he’d have said if I’d told him I was dreaming of driving up and down the coast boinking random bunches of grateful grannies.

I think he’d tell me to get my own damn dreams and stop stealing his.

Of death and dreams
Posted by Chris Rodell at 12:30 PM

They should probably put your head
in a guillotine....

I'm going to assume that's a line from "Dream Police," Tom. Yes? And I hope you only mean my dream head.