My political persuasion? The exact opposite of conservative 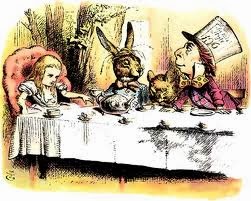 (739 words)
It’s taken the government shutdown and the crestfallen disappointment of an old friend for me to determine how to describe my political leanings.

I am the exact opposite of conservative.

That used to mean liberal. Anymore, I’m not so sure.

My determination after the ’12 elections to become as apolitical as practical lead to a state of near bliss.

I decided I’d vote, but disengage from any petty back ‘n’ forth that so sours the souls of men and women who devote themselves to the horse race aspects of the daily Beltway fracas.

I did this because I figured the ’12 election had settled so much. It was a resounding victory for Democrats, my ancestral party home.

The conservative echo chamber had convinced itself their guy was going to win and he got thumped.

I was sure the GOP would go through a long, healthy period of soul-searching that would lead the party of Eisenhower and Reagan -- and my own father -- to come to its senses and cease with their silly tantrums over birth certificates, death panels and Big Gulp conspiracy theories.

Plus I figured the results and demographic trends meant the White House was safe from conservatives for another 20 years.

This morning, I realize I was wrong.

The saner aspects of the GOP are in a Brokeback Mountain relationship with their Tea Party brethren. They sense what they are doing is somehow wrong, but they just can’t quit them.

And, boy, they’d really hate my analogy that what they’re doing is like being in a lusty gay relationship.

Turns out I was correct about the soul-searching. I was just mistaken about its duration.

Within days after being sworn in, Texan Ted Cruz was asked what surprises him most about being a Senator. He said it was the palpable sense of defeatism among his fellow Republicans.

I puzzled over his answer and came up with an idea as to why he sensed so much defeatism. Here’s what popped into my head:

As I said last November, Obama’s re-election was the lancing of a hysterical boil. Certainly, the GOP would realize the voting public was fed up with their shrill diversions.

They wanted to make the election about Obamacare. Fair enough.

The people spoke, as did the Supreme Court.

And here we go again.

What is surprising is how many GOP honchos who once nurtured the Tea Party’s rise are now decrying the extreme behavior they once cheered. You see it with Karl Rove and former Bush speech-writer Michael Gerson.

The Pittsburgh Post-Gazette every Sunday runs the reliably right-wing lunacies of columnist Jack Kelly. He’s as extreme as they come, often saying Obama deserves to be impeached for everything from Benghazi to because he’s married to a woman who thinks we should eat more vegetables.

So I was shocked to read Sunday he’d turned on his readership.

He said this government shut down was a terrible idea and he blamed in his words, “The Brain Dead Right.”

This Tea Party pundit, a darling for his anti-Obama screeds, was saying his constituents were idiots, that his four years of cheerleading them had been a mistake.

The only people who remain convinced the shut down is sound strategy are the right wing talk hosts who have a vested interest in keeping their listeners crazy and afraid.

That brings me to my old friend who was truly shaken when he heard me express what he considered a liberal opinion. We were discussing the police shooting of the  drug addicted pharmacy robber (story link below).

I said it was an unnecessary killing of a garden variety drug addict in an operation that needlessly risked the lives of three police officers, one whom suffered vision loss after being shot in the face.

He thought this was liberal.

Like many steadfast conservatives, he’d been conditioned to mistake logic for liberal.

Gee, I don’t feel all that liberal.

Really, I feel like I’ll bet 80 percent of the voting public feels; liberal on some things; conservative on others.

But, hey, if you’re more comfortable categorizing me, let me make it simple for you.

The Killing in Mr. Rogers’ Neighborhood

One-word answers to many vexing questions

Bringing civility back to political yapping
Posted by Chris Rodell at 3:25 PM