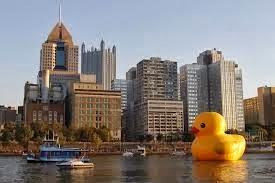 (737 words)
Me and the girls were coming home from seeing Pittsburgh’s giant rubber duckie when Nana told us the story of her migrating nipples.

It was a very surreal day.

I had trouble believing something that consequential could move around so easily.

And I’m talking about her nipples, not the great big duck, which I understand can be moved with a tug boat and steel cables.

So many conversations with my dear mother -- she’ll be 81 in December -- are surreal these days. It’s a running soundtrack of our hour-long drives from her home in Pittsburgh’s South Hills to visit in our Latrobe home.

I ought to podcast them.

I drive a 2007 Saturn Vue, but when she’s in the car it feels like we’re motoring down the Parkway East in that psychedelic boat the Gene Wilder character skippered in the first and still-superior Willie Wonka movie from 1971.

I have trouble separating hallucination from reality.

She has dementia, but it’s a sly sort. She’s at a stage where she’ll sometimes do and say things that will have you conclude, yep, she’s lost it. Then in the very next sentence she’ll make perfect sense.

The combination disorients and I find myself spending the next few days trying to reconstruct the bizarre conversations.

That’s why today, four days later, I can’t get her nipples off my mind.

Odd, because I swear I remember her telling me I was a bottle baby.

All the pink fountains are to blame. It’s Breast Cancer Awareness Month and many of the city fountains are splashing pink. My car mate daughters, ages 13 and 7, thought that was very cool.

“Why are the fountains pink?” Mom asked.

I explained to her the symbolism. As she lost both her breasts to cancer in 1982, I thought it might be good for her granddaughters to hear about her experience.

Now I’m not so sure.

Because the thrust of Nana’s story didn’t deal with the gravity of this killer disease, prevention or how lifestyle choices can impact women’s health. It dealt instead with migratory nipples.

“I don’t remember the operation,” she said. “All I remember is looking down and seeing my nipples on my hips.”

The recollection enlivened Josie and Lucy.

“Your nipples were on your hips?” asked Josie.

She explained when the doctors told her they were removing her breasts, they said the could save the nipples by temporarily transplanting them to her hips where they’d be nurtured until they could be put back where they belonged.

I hadn’t heard this story. Or maybe I had. I was about 20 when it happened. I was very self-centered at the time and, I’m sure, pre-occupied with the quest for finding handy access to female nipples that weren’t attached to my mother.

Now, I wanted to know all about her hip nipples.

Where they comfortable? Did she have to be careful when she put her keys in her pockets? Could Dad have taken one -- or two -- for the team and had them put on him just below his own?

I looked into the rear view mirror and saw Lucy, the youngest, had zipped down her top and was looking back and forth on her chest like she was observing a volley at a tennis match.

“I remember a lot of discussion with the doctors,” she said. “They said we didn’t have to to save them, but most women did for cosmetic reasons. So when they removed my breasts they took the nipples off and sewed them into my hips.

“A few months later, after the reconstructive surgery, they put the nipples back where they belonged. I don’t think anyone’s seen them ever since.”

We spent much of the remainder of the drive discussing where else Nana’s nipples could have gone with, inevitably, our stupid dog playing a donor role.

I had hoped my Mom would explain the danger and difficulties associated with surviving breast cancer; that maybe the girls would glean some worldly sympathy for the sisterhood, something their mother and I strongly encourage.

And I was hoping this post would have some heartfelt gravity about how men can support the women in our lives and encourage them to fight this cruel disease.

Instead, in the end it’s just a little piece about nipple mobility.

I guess it’s something I just had to get off my chest.

My gay friend John
Posted by Chris Rodell at 11:21 AM