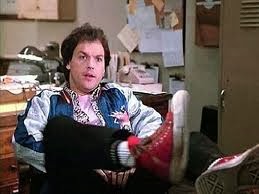 (1,100 words)
I don’t have an autograph book or any photo albums with stilted pictures of me standing next to famous people.

What I do have are fond memories of me shaking hands with famous people.

I think the common man’s handshake is the most valuable way to communicate ever developed.

Any contemptible stranger could phone, text or e-mail me and fool me into thinking, gee, this is a really decent bloke.

But you can’t fake the shake. A good firm handshake with essential eye contact reveals more about a man than any polished resume ever could.

Remember the scene from “It’s a Wonderful Life” where crabby old Potter tries to woo George into leaving the Bailey Building & Loan? It’s a sweetheart deal that promises George a princely salary, corporate stability and hints at European trips certain to satisfy the ache of homebound wanderlust.

And George is going to take it. But then something happens to sour the whole deal.

He reacts as if he’s stepped in something stinky. The disgust on his face is palpable.

A lousy handshake is a physical affront to our masculinity. If you can’t shake a man’s hand you might as well don an apron on and get busy ironing the doilies in time for tea.

Take it from me, the way to shake a man’s hand is firm and bracing. If it were a hug it would be the kind where you’d jump into the man’s arms, throw your legs around him and lovingly squeeze until his face starts to purple.

And won’t we all enjoy a more jubilant society when real men like me feel uninhibited enough to enshrine that as our carefree buddy-buddy sidewalk howdy?

Until that day dawns, here’s the lowdown on how to shake a man’s hand: The four fingers form a vertical salute with the thumb pointing skyward; the webbing between the thumb and fingers becomes the mutual contact point; contact triggers the digits to begin a firm embrace.

Eye contact, one pump and your done. Two pumps is okay, but any more than two and you’d better already have researched which states have given the green light to same sex marriages.

So, as you can discern, I’m an expert on the manly handshake.

That’s why I was distraught last week when someone told me I had a lousy handshake.

And it was a babe!

Yes, I hadn’t seen her in a while. It was at a Pittsburgh soiree at the posh Fairmont Hotel. I’ve done some stories about the hotel and the PR person was kind enough to invite me to a swanky art reception they were hosting.

An experienced gent like myself reads those same two words and immediately thinks of two other words.

Right away, I changed into my church shoes and dashed straight to Pittsburgh. I had barely made it through the revolving door when an extended hand stopped me before I could even snag my first free drink.

So naturally I’m in an already distressed state, but this woman is a big-shot in the Pittsburgh publishing crowd and she’s always treated me great.

We shake and within seconds I’m all shook up.

“Wow! You have a terrible handshake,” she exclaimed. “A great writer like you should have a great handshake.”

I was too, well, shaken, to point out what a great writer really needs is a great book contract.

How could this be?

“You shake a woman’s hand the same way you would a man’s,” she advised.

I realized she had a point. I do shake a woman’s hand differently and by differently I mean usually not at all.

See, I lead a very hermetic life. I see maybe the same 10 or so guys every other day or so and all we do is sit around the bar talking about why the Pirates are great, why the Steelers stink and how’d we all come to have such manly handshakes.

It’s very rare for me to come into contact with any women in any professional situation. In fact, the most in-person business I ever conduct with a woman is after she’s served me breakfast or some other meal and I’m trying to explain to her why my tip isn’t nearly as insufficient as she contends.

Now I know you shake a woman’s hand the same way you do a man’s.

So, thanks, Betsy, for the etiquette tip. I’m especially grateful because it gives me the opportunity to tell the story of my greatest handshake ever.

It was with Michael Keaton.

It was 1990 and he’d just appeared as “Batman” and was at the height of his fame. A regular Pittsburgh guy, I’d loved him ever since his 1982 appearance in the uproarious “Night Shift.”

He was rich, famous and internationally beloved.

That means in 1990 about the only things we had in common were we were both Pirate fans with full bladders.

Yes, we met in the stinking men’s room at old Three Rivers Stadium. The Pirates were playing -- how's this for coincidence? -- the Cincinnati Reds in the MLB playoffs and Keaton was there to throw out the first pitch.

The cool thing about him was Batman was sitting in the seats with the fans and not in some luxury box. What I didn’t know until the stall door popped open was that he was using the same pee places as us mere peons.

It was perfectly cool. I was next in line at the stall door. I heard a courteous flush, the door unlatch and next thing I know there I was face-to-face with Batman.

“Michael Keaton!” I said. “Great to meet you! Can I shake your hand?”

I did exactly as I said above -- eye contact, finger salute, thumb toward heaven -- and Michael Keaton reflexively did the same.

Our hands locked, one quick pump.

Everyone heard it and everyone laughed.

And that’s the story of my greatest handshake ever.

I may have some work to do with the ladies, but I can forever prove I don’t have what at least one Hollywood A-lister thinks is a lousy Potter handshake.

And that my potty handshake is pretty sensational.