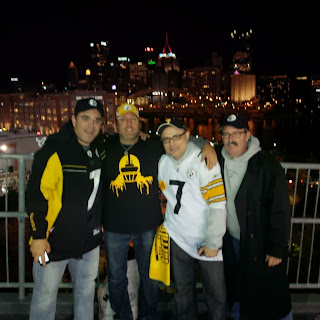 I wish it had another logo because I’ve detested Rolling Rock beer ever since May 19, 2006, when Anheuser-Busch moved the brewing operations from Latrobe to New Jersey, costing many of my local friends their jobs. Worse, for marketing purposes they still pretend it’s brewed in Latrobe and don’t even mention the despicable relocation on the brand’s website.

But I still love the old sweatshirt because of the quarter-sized holes I cut in the front of it.

It happened after I was wolfing down a tailgate hotdog and two mustard-covered onions tumbled out of my mouth and down the front of the sweatshirt. The yellow stains were indelible.

I couldn’t throw the garment away. But wearing it in that condition would mean everyone would know I’m a slob.

So one day I took scissors and cut little holes out around the stains.

Although it seemed to me the perfect solution, my wife said it made me look like an idiot, a jibe any married father of two daughters learns over cruel time to either ignore or perish.

But I just love it, now more than ever.

I like it because the lower hole is in the waist-high belly pouch. So I can stick my hand in there and put my index finger through the hole, wiggle it and people will think I’m wiggling something besides my finger.

I’ve learned over the years that this innocuous little gesture is very alarming to parents of small children in elevators.

I was finger wiggling all over town this weekend.

This was the weekend my buddies from New York City storm into town to attend a Steeler game and whoop it up in the ‘burgh. There were six of them this time.

Only one of them is a native. The rest just love Pittsburgh almost every bit as much as they love the Big Apple. That makes me proud. After about 20 years of this, it’s become one of my favorite weekends of the whole year.

First I love overnighting in Pittsburgh. We stay at the Marriott SpringHill Suites by PNC Park. I park the car on Saturday and don’t move it until Monday morning.

We walk everywhere. Well, it’s often more of a stumble than a walk. It’s rarely in a straight line and seldom goes forward very far without one or the other of us needing to stop to lean against a sturdy tree.

This will surprise anyone familiar with my habits, but I believe I suffer from an insufficient amount of guy time. I see my Pond bar buddies every couple of days or so, but those happy times are often interrupted by routine family matters that require at least some sobriety.

That never happens on these weekends. I know I can without interruption laugh, smoke, drink, swear, fart and quote Homer Simpson the way more cerebral sorts quote Aristotle and the only thing it will lead to is more of the same.

That’s why this weekend is so much fun. Our marquee visits included Bloom’s Cigar, Jack’s, The Original Oyster House, Primanti’s, DeLuca’s, Peppi’s for Roethlisburgers and, of course, Heinz Field to watch the Steelers beat the Baltimore Ravens.

And all day yesterday I felt as if I’d been run over by a PAT bus.

Often the things we most want are the things that’ll kill us the quickest if we were given unrestricted access to them.

For me that would be fun guys, Pittsburgh and all the free time I need to laugh myself hoarse.

It’s perfectly dissolute. For three days I get to feel like Arthur Bach, the drunken millionaire from the 1981 Dudley Moore movie “Arthur.”

If you’re one of those people to whom that sounds fun, come and join us next year. Pittsburgh is fantastic.

If you think that kind of indulgence is hazardous stupidity, feel free to scold. Call me an idiot. Wag your finger at me.

I’ll respond by wiggling mine right back at you.

I promise it’ll just be my finger I’m wiggling.