Not feeling groovy about pumping gas 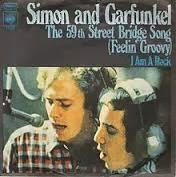 (722 words)
You don’t hear the phrase “feelin’ groovy” much anymore and that’s a bit of a pity.

I guess “groovy” got swamped by “cool,” and I’m hip with that, a declaration that allows me to span six decades of slang to describe the response informal folk give when anyone would ask, “Hey, how ya doin’?”

“Feelin’ groovy” had its heyday in the summer of 1967 when Simon & Garfunkel released a song called “The 59th Street Bridge Song.” It remains one of the most catchy songs ever recorded.

I mistakenly thought the song was called “Feelin’ Groovy,” because the words “Feelin’ Groovy” are sung throughout and Manhattan’s 59th Street Bridge is never even mentioned once, so there’s some enigmatic artistry going on there.

It would be like Irving Berlin calling “God Bless America” something like “Midnight at the Malt Shoppe” just to mess with our heads.

What do you expect from Simon & Garfunkel? This is the duo that released a song called “The Sound of Silence” that is three minutes and four seconds of titular contradiction.

I caught myself feelin’ momentarily groovy last week when I was standing in the drizzle for about seven minutes to pay $3.49 a gallon for gas, something I do about two or three times a week.

The recognition left me feeling something other than groovy.

I felt irritated, my default emotion whenever considering big picture ways mankind’s getting it all wrong.

No one should feel groovy pumping their own gas. It is our most tedious time suck.

Pumping gas is one of those things that’s actually gotten much worse over the past 100 years for anyone who relies on any standard internal combustion engine to get from Point A to Point B.

Back in the day our great-grandfathers used to drive vehicles up to what were called filling stations. That’s where a polite young chap would approach and say, “Fill ‘er up, Mister?”

See, women didn’t drive vehicles back then. Couldn’t vote either. Or drink with men in taverns.

And I’ll leave it to individual readers to decide for themselves whether that pre-suffragette trifecta constituted the good old days.

But this filling station attendant -- let’s call him Gomer -- would pump the gas, check the tires, the oil and clean the windshields while, I guess, our ancestors would just sit there and fiddle with their primitive smart phones. And at the conclusion of all this lavish service, Gomer would say, “That’ll be one dollar and 12 cents.”

Think about that next month when you’re standing in a sideways rain pumping your own gas for $60.

That’s why all the trappings of getting gas -- music, reading material, promotions, TVs, even --are designed to make us feel so groovy; their aim is to lull us into complacency about man’s most tedious waste of time.

It’s all designed to distract us from thinking about what we have to go through simply to get gas.

I purchase most of my mine at a place called Sheetz, a six-state mid-Atlantic chain of 446 convenience marts that sell everything, I think, except sheets.

In fact, the stores were founded in 1952 by an Altoona, Pennsylvania, man named Bob Sheetz. It would have been interesting to see what he’d have named his stores if he’d have been born Bob Junkfood.

I hope it’s practical for my next car to be electric.

I’ll do a little jig every time I pull into my garage on some wintry night and just plug it in and forget about it.

Groovy, by the way, is a phrase that has its roots in phonographic turntable technology. The needle hitting the groove would make a sublime sound many still recall as superior to digital innovations. It was groovy.

But back in the 19th century groovy had a negative connotation. It referred to rutted roads where wagon wheels got stuck. The roads were groovy.

Funny, but I mistakenly thought groovy had an obvious sexual connotation, too. It does not. So, apparently, the intimate coupling of a man and a woman is groovy only to me.

Because every time I stand there wasting my time pumping gas I feel like I’m getting screwed.