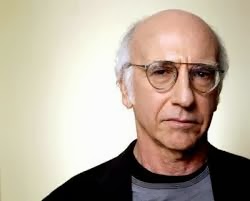 Crafty headline writers over the past few days have rejoiced over the timely opportunity to describe a new baldness cure as “hair raising.”

The news is that they were able to grow human hair on lab mice.

And let’s take a moment to exalt that we live in a world so free of want, poverty and deprivation that we can devote precious research dollars to tinker with mice cells just to satisfy the vanity of men like Larry David.

None of the stories I saw said anything if they’d used previously bald mice as guinea pigs -- and I can only begin to guess how that designation rates on the rodent status ladder.

I know I’ve never seen a bald mouse or even one with a cheap toupee.

Mickey Mouse makes Homer Simpson look like a hippie. In fact, when you apply a critical eye, Mickey not only looks bald but also appears to be a mouse of African-American descent, almost like Al Roker just not as cheerful.

Then one day a friend showed me a picture of a balding middle-aged stranger with his arm around my daughter.

Instantly alarmed, I demanded to know the degenerate’s identity.

Then he told me the degenerate was I and my alarm spiked. The picture had been taken from behind. No one had told me I’d been succumbing to male pattern baldness.

This was strange because my daughters are reliable chroniclers of my many flaws. I can only guess the only reason they didn’t gleefully point out I am going bald is because they’re still too short to see the top of my head.

But now baldness is -- and there’s no other way to put it -- always on my mind.

The awareness led to an entrepreneurial idea recently when I thought about selling ad space on my bald spot.

I was at a book signing a few weeks ago and I figured people were getting bored staring at the top of my head for the two or so minutes it takes me to sign a book.

I put a lot of heart and, yes, color into my book signings so it takes a while. In fact, it takes me just a little less time to sign a book than it takes guys like John Grisham and Stephen King to write ones.

I think if I had GEICO tattooed on my bald spot it would give people something to muse over while they were waiting. To be really colorful, I could have them spend the time contributing little drawings of their own.

As it is, they have nothing better to do than just sort of stare there the way people do when they’re waiting for a malfunctioning TV set to resume the broadcast.

The new treatment involves culturing altered human cells within tissue from the circumcised foreskins of newborns -- and talk about your waste not/want not -- and grafting the resulting structures on the backs of mice.

Call it “Foreskins for Fiveheads!”

Really, the whole process seems deviant enough to have even old Doc Frankenstein puzzling over the ethics.

I wonder about the inevitable glitches. Like what if the new hairs prove resistant to barbering and grow like kudzu or other invasive weeds?

Me, I prefer more organic solutions.

I’ve always envisioned there’d one day be vast follicle farms where bald men can go to harvest some hairs.

Imagine for a moment how beautiful it would look to see lush fields of auburn, blonde, chestnut and jet black, some curly, some straight, all waving in the wind. On weekends you’d see dozens of bald heads joyfully frolicking through the fields like deer through corn.

I imagine the transferral process wound require men spread a little manure on their bald scalps to encourage natural growth.

Maybe researchers will conclude many men like me have all the noggin manure we’ll ever need.

Truly professional, Exactly what i was looking for. Will bookmark this blog for future posts . Cheers:) Source: GOT MY HAIR BACK

This blog is really very helpful, thanks for sharing this information
Dandruff Treatment in Bangalore

Thanks For Sharing great content with us.
Hair loss problem is caused by fungal infection and dandruff. sometimes a wide amount of hair loss makes your scalp area bald. Don't worry about it because you can get surgery of Hair Transplant in Ludhiana at affordable prices.