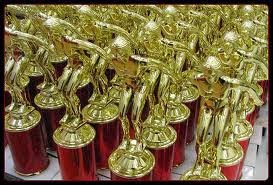 (728 words)
My 7th grade daughter has her first swim meet on Saturday and everyone knows what that means.

By Sunday I’ll begin constructing an additional wing to our house we can use as her trophy room.

It’s my understanding we live in an age where kids her age are awarded trophies for anything. She’ll get a trophy if she wins; if she finishes second; third; or anywhere between third and last. It’s likely someone’s going to hand her a trophy if she manages to get into and out of the pool without the emergency assistance of SEAL Team 6.

This is becoming yet another hot button issue in our culture wars. Many people believe it’s ruining a generation that’s being coddled into thinking there are no winners and losers.

I see many adults sneering and ridiculing the idea of every child getting a trophy. These parents rant excessive trophy distribution sends the wrong message, that healthy competition is necessary to inform participants of their playground worth.

I see these parents and think someone should have given them more trophies when they were kids.

I’m no expert but I believe it’s impossible to over-love a child.

And this I do know: There are often dreadful consequences to under-loving one.

An extreme historical example of the latter: “Mom was distant, Dad never loved me. Coach benched me for all the soccer matches. I was happiest when I was in a still, small room with just my brushes and paints, but no one ever gave me any trophies for my portraits. It was a very sad and unfulfilling childhood. I know! Now, I’ll show ‘em. I’ll invade Poland!”

Maybe it’s a dearth of childhood trophies that lead history’s tyrants to engage in other sorts of conquests. The historical data is incomplete.

Then there’s this: many of the people who are complaining most loudly about everyone getting a trophy are the same people most apt to assure us the world’s going straight to hell.

And who’s to argue?

The government shut-down is a perfect example.

The whole nonsense was engaged between groups of mostly men who since birth have been conditioned that total victory is the only objective. They had to win on the playgrounds and later in the voting booths. Coming in second wasn’t an option. Compromise was for losers.

They had to get that trophy.

Thanks for all that, fellas.

It wasn’t a game to most Americans.

Then there’s another prominent scourge on our culture directly related to our winner-take-all society. That would be our obnoxious world of sports.

We rail against prominent athletes for acting so entitled when we’re the ones that entitle them.

Just check out any NFL game this weekend.

You will see gloating, preening, taunting and gaudy showboating galore.

This is what happens when you spend an entire life telling children with under-developed psyches that they are better than everyone else.

How different would these men be if in sixth grade they’d seen Timmy get a trophy because he, too, had tried really hard? Maybe an adult explaining why everyone’s getting a trophy would bestow some sportsmanlike compassion, some essential humility.

And, guaranteed, giving Timmy a trophy will in no way diminish the competitive edge or ego of our greatest athletes. I’ll bet Payton Manning never needed a trophy to know he’s a real winner.

So here’s what’s going to happen Saturday after the big swim meet and, win or lose, everyone gets their trophies.

Win or lose, I’m going to tell my daughter she’s the world’s greatest swimmer and that her Daddy will love her forever. Then we’ll all go to dinner together -- she picks the place! -- and we’ll set the trophy in the center of the table and all bask in its golden little glow.

Life, our most exquisite and patient teacher, will in its own good time reveal whether Olympic glory is in her future.

In the meantime I guarantee you tomorrow night, win or lose, that precious little girl will feel special and enjoy a childhood memory that’ll brighten her days when being an adult will do its damndest to try and grind her down to a sorry nub.

Thank you, one and all, for reading clear to the end of today’s post.

You can all pick your trophies up in the principal’s office.

Youth hockey in hot water over icing anthem
Posted by Chris Rodell at 11:52 AM

Email ThisBlogThis!Share to TwitterShare to FacebookShare to Pinterest
Labels: all kids should get trophies, Hitler paintings, Hitler trophy, Payton Manning trophies, the problem with giving all the kids trophies