Too much Zimmerman commentary: Here's mine! 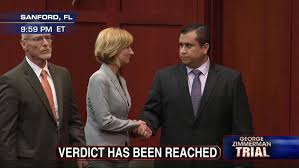 (730 words)
You may or may not have noticed a deliberate trend here on the blog: It’s much less topical than it used to be.

I used to write much more “off the news,” a phrase that means I’d read the paper, pick the most topical story and then riff on it.

That meant at this time last year I was writing a lot about politics and angry strangers shooting multiple innocents.

Not so much lately.

In fact, recent blog topics include ants on gum, the idea that eating circular pizza three times a day can be a well-rounded diet and -- speaking of well-rounded -- Hilary Swank’s nipples.

Those are all top-of-the-head ideas, something I basically pulled out of thin air.

And as I mentioned top-of-the-head, I should re-emphasize that the ideas where pulled out of thin air. Not thin hair, something else that’s occurring on the top of my head.

But I always do try and address any big national story just to get my thoughts on record for anyone who might care.

That’s why the George Zimmerman acquittal leaves me conflicted.

Because who really cares what I think?

Who cares what anyone thinks?

I read all the opinions today. The thing that strikes me most is how much of them there are and how little of it is relevant.

We live during a time where the only thing that exceeds our national inarticulateness is the number of megaphones possessed by all those who have nothing to say -- and that salient critique is coming from just another guy with a blog!

I despise the news organizations that read roll calls of celebrity Tweets about the verdict. It’s reporting at its laziest.

The only ones I care to hear from are the six jurors.

Jurors in most every case bring a refreshing wisdom to the proceedings. They heard all the evidence. They genuinely care about a just verdict. I admire their insights and dedication to hearing all the facts.

That there were only six of them and they were all white women is a little troubling, but that’s what both sides agreed to.

I’m just glad I wasn’t selected for this jury.

Because how could anyone make such a god-like decision in a case with evidence as foggy as this? I don’t recall a case where so many reasonable seeming witnesses so diametrically disagreed with one another over the same set of facts.

Me, I thought a manslaughter conviction would have been fair. There were so many ways Zimmerman could have avoided the conflict that wound up escalating into senseless death.

By coincidence, my iPod random selected Bruce Springsteen’s “American Skin (41 Shots)” as I was weighing whether I should address the verdict or something just silly.

Never heard it? It’s a soul-searing lament about the 1999 killing of Amadou Diallo, who at 23 was the unarmed target of 41 shots, 19 of which struck him, when police wrongly suspected him of being a rapist with a gun.

They were mistaken. He was a scared kid in a dim hallway reaching for his wallet.

Springsteen played the song during his ’12 tour as tribute to Trayvon Martin, a nod to the many poignant parallels.

What I like about “American Skin” is that unlike so much of the commentary polluting the airwaves today it is totally non-judgmental.

“Is it a gun? Is it a knife? Is it a wallet? This is your life. It ain’t no secret, no secret my friend. You can get killed just for living in your American Skin.”

Gets me every time.

I can only imagine what it would do to me if I was the father of two young black men.

I guess the comments that most resonate with me where the ones from another black man cut down too young by gun fire.

Today I prefer King’s sentiment to the cacophony of hate coming from those who say Trayvon Martin had it coming and those who say Zimmerman’s going to get his.

And if that’s too much to ask, how about this?

Help the ones who feel the Zimmerman verdict means they’re doomed to be target practice just for living in their American skin.

Posses, verdicts & vengeance
Posted by Chris Rodell at 11:56 AM