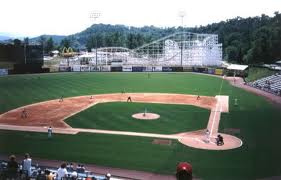 (816 words)
As the following post deals with dead amusement park mothers and nearly-decapitated ballpark babies, I apologize in advance for the tastelessness that’s bound to ensue. I just can’t help myself.

So I ask that you please remain seated until the ride comes to a complete stop.

We enjoyed a great all-American frolic Saturday in nearby Altoona. We started at heirloom Lakemont Park, home to the world’s oldest surviving-roller coaster, the 111-year-old Leap the Dips.

Next up was the night game between the Altoona Curve and the Erie SeaWolves. The two parks are adjacent and Lakemont’s Skyliner roller coaster serves as an appealing right field back drop.

Discordant death stalked us nearly every step of the way.

You can’t strap your precious daughters into a rickety 111-year-old roller coaster and not think of that poor woman who plunged to her death on the Six Flags coaster in Texas.

From what I’ve read 52-year-old Rosa Ayala-Goana was instantly aware her safety harness had failed. She screamed for them to not to start the ride. Her screams were ignored.

What could be more tragic?

How about this: Taking your newborn to a baseball game and having it decapitated by a foul ball.

This nearly happened right before our eyes.

We were sitting in the first row of the upper deck just up from third base.

They were great seats. I was happy because I felt confident my 14-year streak without catching a foul ball was about to end. I’ve caught three fouls at Major League baseball games and two of them were remarkable enough to earn huge ovations from more than 30,000 fans, and more thrilling moments are rare.

But I knew I’d have to be careful. We were on the first row of a 20-foot precipice that terminated on a concrete concourse.

I thought of that guy -- another Texas fatality -- who reached to catch a Josh Hamilton souvenir ball, slipped and broke his neck falling headfirst, oh, about 20 feet onto a concrete concourse. It happened right in front of his 6 year old son.

So we’re sitting there in the third inning with top Pirate prospect Greg Polanco batting lefty at the plate. On the third pitch, the 6-foot-4 Palanco swings late at an outside heater.

Oh, how I wish this story could end with me describing how the kid snagged the screaming liner and Bucco scouts rushed up to offer long-term contracts.

But that is not what happened.

What did was the most horrific thing I’ve ever seen in a ballpark -- and I’ve watched the Pirates play 20 years of losing baseball.

The mother was holding the baby to her chest so the child was facing us when the liner struck somewhere in the tiny torso. I have no doubt if the ball had struck the baby in the head the child would have been killed instantly.

The baby was silent for what seemed like 30 seconds. He then let out a wail loud enough to cause the home plate umpire to turn and admire the volume.

I called the Curve office this week and was told the baby was fine. Thank God. It is to those of us who witnessed it a bona fide miracle, although I foresee a future where the guilt-racked mother will become so over-protective the kid’ll be wearing bubble-wrapped body suits until he’s at least 21.

It reminded me of one of the most miraculous survivor stories I’d ever covered.

It was the perfect quote, one I’ll never forget.

And that’s how they loaded him onto the emergency chopper. They cut the chair, kid and pole out and flew the whole works to the trauma center.

What happened to the kid?

He was released the next day, a result that led to the second memorable quote from the story. The surgeon told me: “You couldn’t have picked a better spot to have a baseball-sized rocket run through your torso without causing any lethal damage. It’s a true miracle.”

Where was the reckless kid heading?

He was on his way to acolyte at his local church.

So much mayhem among even all the innocents at ball games, amusement parks and those on their way to pray for salvation.

Anyone know where I can buy a closet full of bubble wrap jump suits?

The one foul thing we all crave