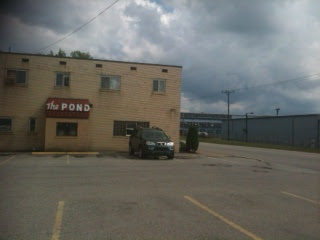 (706 words)
The Pond is closed this week and everyone knows what that means: it’s the week I park out front in the handicapped spot just to sow confusion and mess with the minds of people who think maybe Dave’s let me in to drink free and wonder if he’ll do the same for them.

He won’t, so don’t even bother knocking.

But it’s also the week that the staff we depend upon to feed and inebriate us leaves us to fend for ourselves. It’s terribly upsetting, but we somehow manage.

I asked Keith, the bartender, if he has any vacation plans.

“I have a suggestion,” I said. “Why don’t you go out and spend $700 or so dollars on an authentic wool uniform and gear and go marching up and down the sweltering pastures of central Pennsylvania.”

But neither are the armies of Civil War re-enactors who at this very minute are camped around Gettysburg to commemorate the 150th anniversary of one of history’s most pivotal battles.

Like many history buffs, I have Gettysburg fever. My daughter and I were there in November for three days (links below) and left with many great memories.

But my interest goes deeper than that. It’s because like so many others I’ve read “Confederates in the Attic: Dispatches from the Unfinished Civil War,” the terrific 1998 Tony Horwitz book about hardcore Civil War re-enactors.

How hardcore? They soak their uniform buttons in their own urine so the acids will bestow them with the proper hue. The pain, deprivation and hardship they self-inflict is welcomed as just another step on the path to authenticity.

Horwitz says they call it a "Civil Wargasm."

The part of me that reveres history admires what they do, while the part of me that clings to common sense agrees with Keith. As pastimes go, Civil War re-enactment registers neck-in-neck on the insanity scale with the Trekkie nuts.

Sure, the Trekkies reside in the make-believe realm, but they’re cerebral enough to pursue their silly whimsies in air-conditioned convention halls with catered buffets and indoor plumbing that assure any urine that splashes on their outfits is purely by accident.

It’s entirely possible that by this time tomorrow some of these less fit re-enactors may actually expire in the heat -- and will their deaths be added to official battlefield casualty rolls?

What’s interesting to me is that the Civil War is the last conflict in human history that will attract people who enjoy romanticizing the worst behavior humanity has to offer.

The horrific carnage of World Wars I and II were too sprawling to lend themselves to orchestrated re-creation.

Our more current wars have been mostly urban and lack definition and grandeur. And, heck, there’s probably already video games that let 10-year-olds simulate Pakistani drone strikes almost as genuine as the guys in the Tampa bases who do it for real.

But I have an idea that will allow history buffs to re-create a dandy war without the sweat and pain being experienced by the Gettysburg button pissers.

That would be the Vietnam War.

Not the one fought in the Southeast Asian nation.

I’m talking about the one fought on the college campuses right here in the U.S.A.

This would be a fun and historically relevant period to recreate, especially if you chose to be on the side of the hardcore hippies.

Remember, it was an era of free love and ample drug use. I’m familiar with a lot of people who strive to recreate that lifestyle, but do so without the benefit of historical purpose.

Getting high and getting laid would seem more noble if you could claim that you were doing it under the guise of an re-enactor movement.

Conservative types who thought the war was a really swell idea could get crew cuts and simulate whacking flower children on the heads with their very own “Give Peace A Chance!” protest signs.

The re-enactments could conclude with both sides marching off to celebrate their business degrees by all together doing “The Hustle” down at the campus disco.

As war re-enactments go, this would be much more civil.