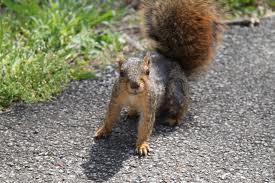 (618 words)
I always thought the Suicidal Squirrels would be a dandy name for a back up band for some hot young rock honey.

You know, “Now, give it up, Cleveland, for Bettye Badass and the Suicidal Squirrels!”

I’ve pondered suicidal squirrels for almost as long as I’ve been driving motor vehicles. I remember seeing a spot-on commercial -- auto insurance, I guess -- from one of the Super Bowls a few years back.

It was very realistic. The squirrel stands there in the middle of my lane and you can almost see the little cartoon balloon above his head that says, “Goodbye Cruel World!”

I’m approaching at about 50 miles hour thinking, “It’s not too late. You’re still young. You’ve got a lot to live for.”

I say a small, fast pray that the great squirrel God intervenes with a miracle.

Then with my fender about 15 feet from the crest of its little head, the squirrel dives left. Then right! Then left again! And then finally it dodges my passenger side tire by inches and launches to safety into the road side scrub.

And I’m trying to will myself not to have a heart attack.

I’m such an animal lover I’ve nearly killed myself in vehicular accidents trying to save the life a squirrel who clearly doesn’t give a crap anymore.

What’s worse is now it looks like the birds are getting in on it.

Maybe it’s a result of climate change, but I’m noticing more birds are flying in perpendicular to traffic inches from my grill. It’s like they’re acting on double dog dares from some depraved finch.

Most of us seasoned enough by life know men and women who’ve killed themselves, giving into a despair so deep they’re sure it’ll never level off.

What? Are they upset they can’t afford a new iPad?

Dead snakes are often squashed up and down the street that runs through the woods outside our home. I can understand a snake wanting to kill itself, weighted as it should be by guilt over its historic role in original sin.

But every female descendant of Eve shares the blame in that, too, and I’ve never once heard a woman apologize for that great big Biblical oops.

Maybe the most confounding animal suicides are those of the mighty whales.

Happens all the time. The evening news breaks in with a story about a marooned leviathan. And humanity always does a collective little jig anytime it works out that they’ve saved the whale.

Me, I can’t help but wondering if the whale is even more morose and thinking sarcastic things like, “Gee, thanks for saving me. I’ve still got all the same problems I had before you saved me ‘cept now my friends are all awkward around me. Really, now I feel like slitting my wrists. Oh, if only I had wrists!”

I guess we need Dr. Doolittle, someone who can talk to the animals and learn what troubles them and what we can do to help.

Maybe someone needs to buy them my book!

The Disney movies always portray woodland creatures as carefree and cheerful, at least right up until the moment a hunter guns down Bambi’s mom.

For squirrels especially to repeatedly show so much suicidal behavior makes no sense.

I think it would be great fun being a squirrel. You sail through the trees. You chase your buddies up the bark. You’re never burdened by having to wear pants even in formal places like squirrel church.

For a squirrel to be suicidal just seems plain nuts.

Maybe they are what they eat.

Email ThisBlogThis!Share to TwitterShare to FacebookShare to Pinterest
Labels: are squirrels depressed, do animals commit suicide, save the whales, squirrel church, suicidal squirrels, why do whales beach