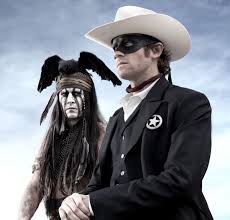 (693 words)
The admission, I know, makes me appear petty, but I always have a spring in my step the Monday after a really big budget movie bombs.

This runs contrary to my every instinct to exalt creative people in whatever they’re endeavoring to do.

I encourage struggling artists, musicians and writers, even as I know I’d be better off if every other writer simultaneously decided it was time to just give up.

But when a $225 million movie like “The Lone Ranger” earns just $45 million, I have to keep from razzing out loud: “Good for you, you bums. You stink! I hope you trip on your next red carpet!”

Some experts are blaming the bomb on their belief that the movie is a Western and Westerns since 1975 have underperformed. A USA Today article lumped “Lone Ranger” in with Will Smith’s “Wild, Wild West” (1999) and “Cowboys & Aliens” (2011) as indicative that movie goers disdain Westerns.

Well, take it from someone who for about two hours every weekend manages to find time to enjoy some vintage John Wayne movie, nothing about the three above mentioned flicks seems Western to me.

They were action films, little different from ones about cartoon superheroes. I saw Johnny Depp as Tonto and thought, “Oh, joy, it’s old Jack Sparrow on a pony. Not for me.”

True Westerns include the recent blockbuster remake of Wayne’s “True Grit,” and “Django Unchained,” a Western I skipped it because I don’t want to endorse Quentin Tarantino’s brand of hyper-violence that by comparison make zombie films seem dainty.

No great Westerns since 1975? Horse poop.

And who could forget the one of the greatest TV miniseries of all-time, the sublime “Lonesome Dove,” and, yeah, I still get the shivers every time I recall the hanging of Jake Spoon.

I think the thing that infuriates me about Hollywood is there is no real minor league.

Fail repeatedly at any other job and you get demoted or fired. A beloved slugger gets sent to the minors when he can no longer belt the curve; floors in an architect’s building cave and it’s back to designing Taco Bells; writers who come up with too many loser book proposals get banished to the literary underbelly of blogger irrelevance.

And, hey, thanks for stopping by!

My point is life is a meritocracy.

Just not in Hollywood.

If it was we wouldn’t this week all be overexposed to Adam Sandler, who is everywhere giving us a perfect example of precisely what’s wrong with the film industry.

I thought there must be some mistake when I saw a promotion for “Grown Ups.” That stinker was three years old. Then I realized there had indeed been a mistake -- and Hollywood is making it.

I couldn’t believe it.

The original 2010 movie did well at the box office. Of course it did. It starred Sandler, Kevin James, Chris Rock and David Spade. But I detected no cultural groundswell of movie goers clamoring for a sequel to a movie that scored 9 percent on www.rottentomatoes.com.

Yet, that’s exactly what we’re getting.

Have these people no artistic integrity?

It would be one thing if I could ignore the movie, which I’ll certainly do. But it will be impossible for anyone to ignore the promotion.

This morning the cast was yukking it up on the set of ABC’s “Good Morning America.” It wasn’t just a guest promo either. They were on for the whole show. So, clearly, whomever owns ABC has a vested interest in “Grown Ups 2” succeeding.

We are suffocating from a conspiracy of mediocrity.

I think I’ll write a screenplay about a has-been Hollywood actor who gets busted down to re-appreciate his craft by running a high school drama club out in the middle of nowhere.

It’s going to have a happy ending, I promise.

He’ll never be heard from again.

A Brad Pitt-y party
Posted by Chris Rodell at 12:04 PM