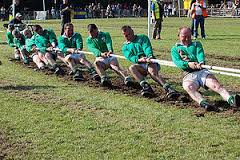 (706 words)
I’m maybe the only guy in the world who when he heard of Detroit’s bankruptcy didn’t immediately think of lost pensions, municipal hardships or a city that needs saving.

No, I thought of a schoolyard game.

I thought of tug-of-war.

When was the last time you were in one? Sixth grade? Eighth?

That was about it for me. I remember my side won and I remember the exhilaration  of pulling our opponents into the pit.

“Survivor” drags out the rope every few seasons and I remember a great M*A*S*H episode that featured a tug between enlisted men and the officers with both sides ending up covered in mud.

It is maybe the only international tug of war and for about 20 years took place across the 1.2 mile long expanse of the Detroit River between Detroit and cross-river rivals from Windsor, Ontario. Teams of 26 men each organized and practiced all year to out-pull their opponents.

I remember reading Canada took a 9-8 lead after her team practiced all year dragging a loaded coal truck across a 1,500-foot field for two hours at a stretch.

The truck’s brakes were fully engaged.

I’ve for 10 years pitched this story to nearly every major men’s or healthy/lifestyle magazine in America. To my amazement, none of them has bit.

You’d think any magazine would welcome a story involving Americans truly pulling together.

I’m fascinated by the logistics of the whole enterprise: Where do they get the rope? Who has a garage big enough to keep the rope the other 364 days when no one needs a 1.2 mile-long rope?

That this event isn’t a nationally televised holiday and competitive hot dog eating is says that our media saturation still has a way to go.

So I don’t know how the bankruptcy will affect the great tug. Maybe right now the police are being ordered to chop up the rope to use as a cheap substitute for metal handcuffs.

But I think this is the perfect time to up the stakes.

Yes, it’s time for a Europe vs. USA tug of war.

This has the potential to be one of the greatest events in the history of mankind. It’s something everyone will want to be part of.

The logistics promise to be tricky. We’ll, of course, need to shut down the Atlantic Ocean from just off the coast of Norfolk, Virginia, clear to Brest, France. And we’ll also need to close down traffic on every north-south interstate from coastal Virginia to about Topeka, Kansas.

As we don’t want to exclude anyone from participating, we should just let both continents stack the tug as much as they want.

For instance, France could probably enlist about 2 million people. But the French are very petite and fit. Two million Frenchmen weigh about as much as six guys I know named Bubba so it’ll all even out.

Participants will need to sign insurance waivers because some of the front liners will likely drown. I suggest we use tubby convicts or maybe some of the Gitmo expendables right up front.

With all that ocean determining a real winner might be difficult so we might have to wait until one continent or the other collectively screams uncle.

And winning may not be the most satisfying outcome either. Just imagine the fun if after about five straight days of arduous tugging everyone on the U.S. side simultaneously dropped the rope!

You’d hear the bones snapping clear across the ocean. Ha!

Of course, we’re getting a little bit ahead of ourselves here.

I guess we should first find out if anyone has a 5,000-mile stretch of rope they’re not using hanging in their garage. We can’t have trans-Atlantic tug without one of those.

And how about this?

We charge each participant $5 and the money goes to bail out Detroit, a great American city that’s fallen on hard times.

That way our friends in Michigan would know we’re all really pulling for them.

Email ThisBlogThis!Share to TwitterShare to FacebookShare to Pinterest
Labels: a trans-Atlantic tug of war between US and Europe, Detroit bankruptcy, Detroit River tug of war, M*A*S*H tug of war, tug of war strategy