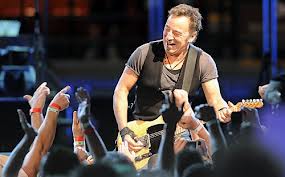 (734 words)
I confess to spending a good deal of my time at the Bruce Springsteen show in Pittsburgh Saturday wishing I could turn a 50-something man into my 12-year-old daughter.

And I wouldn’t have felt like pretending spilling a $7 beer on his bald head was an accident.

This I was really close to doing. Seriously.

Every four or five minutes he’d take out his smart phone to check the college football scores. He was in the seat right in front and one to the right of mine so I’d see it every time over his left shoulder.

It’s a cowardly move, I admit, but being a beer-spill vigilante is the perfect solution to this sort of craven behavior.

I could pretend like I was an idiot and it was an accident. He’d get furious, storm out for at least the duration of “Racing in the Street,” and if my aim was perfect I might gum up his phone.

It’s not like I could tap him on the shoulder and say, “You know, Bruce Springsteen’s 63-years old. You should pay attention because this could be the last time any of us has a chance to see him and because he’s still magnificent.”

And, indeed, he is. I’d say he’s the last of a rare breed, but that would be selling him short. There’s never been anyone like him. I’ve never seen another performer capable of evoking so many emotions.

His 27-song set made me laugh, exalt, cry and care.

It’s something you just can’t get from the final score of the Pitt-Temple game.

I was feeling a bit melancholy during the show because I sense we’re at the end of an era. All the great bands are simultaneously winding down and aren’t being replaced.

The Oct. 6 issue of New York magazine’s cover features this revealing article about the popular band Grizzly Bear (I’ve never heard of them). The cover asks: “Is Rock Stardom Any Way to Make a Living?” and relates how the band just sold out Radio City Music Hall and the band members are all piss poor.

The article said the first half of 2012 was the first time albums older than 18 months outsold new albums. New music isn’t getting played or purchased and part of our culture is dying.

It makes me want to grab people by the collars and tell them we’re losing something precious.

I wonder if the reason I care so much is I spent some formative years in Nashville. I was friends with many talented songwriters who took me to all the best clubs, including the famed Bluebird Cafe, where I’d spend many nights listening to some of Music City’s finest crafting songs that still demand our attention.

I saw management throw people out for even discreet conversation.

I thought of the Bluebird whisper police as the guy at the Springsteen concert kept distracting me by ignoring one of the America’s greatest artists in favor of frequent Top 25 score updates.

There’s an uproar over the Stones charging $700 for tickets, an amount that will attract an elite class of people while excluding so many others.

I’d like to see promoters for their own good institute a policy where fabulously wealthy bands must sell tickets for $100 a pair. The purchasers would sign a pledge to not fiddle with smart phones or behave in ways that distract fellow concert-goers. Further, they must pass a test proving they have a deep knowledge of the artist’s career catalogue and what the appropriate emotion to register when someone like Springsteen plays his Clarence Clemons tribute during “Tenth Avenue Freeze-out.”

They must swear securing a seat for the concert will mean the world to them, that attending is matter of life or death.

And they must promise to give the second ticket to some struggling musician who will perhaps be inspired by what they see and may go home and in six months write the next “Born to Run” to save an industry that is dying before our eyes.

That way we’d be guaranteed to be sitting around people who already know the score without having to check their smart phones.

• The Boss for God: a concert review

In April we took our sons (ages 15 and 13) to the Springsteen show near Detriot. The elder plays guitar, the younger, bass, and even though we had very possibly the worst seats in the entire Palace of Auburn Hills (and despite no Clarence) it may have been my best Bruce show ever because I got to share it with my kids. They were completely blown away, and I left with the deep satisfaction that if I died now (not that I have any intention) at least I'd have gotten my kids to a Springsteen show. Not sure if it will be enough to propel the boys to save rock n roll, but it was a hell of a special night.

Wow. What a great night. You should be so proud. And what a memory you gave your boys. Thanks so much, Amy, for sharing your story with me. And for reading!