Late roach eater may have been dietary pioneer 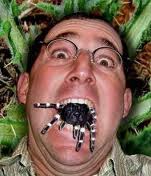 We all thought of someone we know who’ll eat bugs for bucks when we read of the untimely demise of Edward Archbold.

News reports said the 32-year-old West Palm Beach, Florida, man died hours after winning a cockroach eating contest where the first prize was a python from the competition-sponsoring reptile farm.

The result shocked snake farmer Ben Siegel who said, “We feel terribly awful. He looked like he just wanted to show off and was very nice.”

He said Archbold was “the life of the party,” thus forever removing the teeth from the old “you are what you eat” theory.

The story didn’t say whether or not he’s a family man, which may mean his only surviving orphan is the new pet python. I hope he didn’t have kids. Losing a parent  at an early age can be devastating enough without having to explain daddy died eating insects.

Either way, this is bound to be an awkward funeral. He’s probably got some old grandmother who’s hard of hearing who’ll be asking questions like, “What? He died from cheating chalk coaches?”

I immediately thought of my cousin Jimmy, with whom I’ve shared nosebleed Steeler season tickets for about 20 years.

He went through a phase where he’d eat anything, sometimes for nothing. Moths, spiders, grasshoppers -- it’s bound to sound redundant, but the diet would have left even veteran entomologists all bug-eyed.

It’d have the first time they could have had what could be called a field day inside a digestive track.

Archbold was said to have eaten dozens of cockroaches (worms, too, for some reason) before taking the python home.

I’m confident Jimmy could have eaten a bowl of worms, a bucket of cockroaches AND the python before turning on the owner who by then would have been wise to flee the premises before Jimmy seized him by the belt.

Of course, lost in the shock value of all this is the news that cockroaches are a perfectly healthy source of protein and are unlikely to have caused Archbold’s death.

From the AP story: “Unless the roaches were contaminated with some bacteria or other pathogens, I don’t think cockroaches would be unsafe to eat,” said Micheal Adams, a professor of entomology as the University of California at Riverside, who added he’d never heard of someone dying after consuming roaches. “Some people do have allergies to roaches,” he said, “but there are no toxins in roaches or related insects.”

As he doesn’t seem like the kind of refined gent who’d die from the obvious ick factor, I’m eager to see the medical examiner’s report. And, boy, did their jobs just get more interesting.

There’s only so many times you can stamp “cerebral hemorrhage” on an autopsy before you go out of your mind digging around in someone else’s.

I’ve long contended we as a species will need to get a whole lot less picky about what we eat if we’re to endure.

I had a good time on Saturday with my buddy John feasting on what to many is considered as repulsive as eating insects: raw fish.

We love sushi. We had heaping plates of the stuff at Andy’s inside Wholey’s Fish Market. It’s the best in the city.

I’m also fond of anchovies, the offbeat pizza topping many consider the cockroach of the sea.

I’ve for years pitched in vain a story about a Pittsburgh botanist who advocates we should all be eating weeds. This human weedeater says homeowners spend hundreds of dollars each year on harmful pesticides to kill weeds that are perfectly edible.

Really, who’s the royal palate that determined wood-sorrel clover is bad, but iceberg lettuce is not?

Maybe one day we’ll all be eating roaches like raisins.

Who knows? Maybe right now some eclectic chef with a sentimental bent is preparing Roach Pasta a la Archbold.

It’s bound to be better than broccoli.