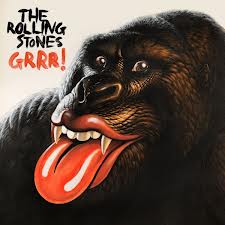 Really, it’s pointless in this age of digital downloading to contend anyone in their right mind would opt for an entire 50-song greatest hits set over pinpoint song selection.

But what’s the point of blogging if you can’t everyone once in a while give into fits of pointlessness?

So here we have the new Rolling Stones 50th anniversary release, “GRRR!” featuring a song for every year they’ve been together and maybe the worst name and worst cover art they’ve ever conceived.

But who cares about that? As always it’s the songs that matter.

These include some of the most indelible songs ever recorded. Most of them we all know by heart.

So you’re fine, but you’re not about whom I’m worried.

Somewhere out there there is some innocent kid who may be unfamiliar with the Stones repertoire. He or she will look to “GRRR!” as the roadmap for how to get into history’s greatest rock ‘n’ roll band.

That person is for whom this post is written.

I will first mention the songs on the actual flawed collection and then the songs that should be there and why.

My list includes 26 different songs than the ones The Stones pick. Read on and you decide who knows The Stones better: me or The Stones.

Warning: As this is excessively long, it’s bound to be typo-laden for now. Sorry!

Disc 1
• “Let’s Spend the Night Together” -- By all means. Lots of great history with this one with everyone from Ed Sullivan to the Red Chinese in 2006 banning it. Plus, it’s just so damn catchy.

Now’s when it starts to get tricky. So many of these songs are consensus picks -- exactly why they should go. Most every Stones fan on the planet has everyone of these in multiple formats. I have seven live or greatest hits versions of “You Can’t Always Get What You Want.” Most of the songs you’ll see on the last two discs are the same ones you’ll see on the 40th anniversary “Forty Licks” disc. So why the redundancy? So some of these are bound to be controversial.

•  “Jumpin’ Jack Flash” -- I’m aiming for controversy, but that doesn’t mean I want people to think I’m an idiot. One of their 50 best? It’s one of their 5 best.
• “Sympathy for the Devil” -- How about a little sympathy for anyone who’d dare leave this off the list. Not me.

• “You Can’t Always Get What You Want”-- For reasons stated above, buh-bye. Let’s instead insert “Monkey Man,” a song where the five bandmates each seem to be playing five different songs on the bridge and all comes magically together.

• “Miss You” -- From 1978’s “Some Girls,” such a great album. I really like and recommend “No Spare Parts” and “Do You Think I Really Care?” two of the new bonus tracks recently re-released. I’m tempted to sub “Shattered,” “Before They Make Me Run,” but “Miss You” is just so representative of the album and the era it has to stay.
• “Doom and Gloom” -- Like “Don’t Stop,” this is a new song written to add spice to the an old collection. But, wow, does this work. Great song, great lyrics. It’s a top 50 right out of the gate.

• “One More Shot” -- Unavailable until the album release. Let’s give them the benefit of the doubt and say this will be great.

• For Boss fans only: A Springsteen career retrospective