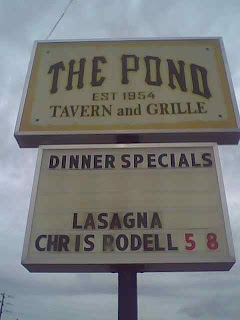 This is bound to sound facetious, but The Pond book signing was one of the 50 best nights of my life, maybe a top 25er if you toss obvious nights that involved me getting lucky with the missus.

Sold 43 books and got drunk for free.

Both of those are exceptional, but there was so much more.

First, I remain tickled by the thrill of getting my name on the bar marquee. The bar’s located on Lincoln Avenue, which is Latrobe’s equivalent of Broadway if Broadway had things like laundromats, tanning salons and an old bait shop.

I don’t recall another living person who’s been so feted since the bar opened in 1954. That means I’m one up on local legends Arnold Palmer and Fred Rogers, not to mention folks like Mandela and Mother Teresa. To be fair none of the humanitarians has like me rented an upstairs apartment for an office so that may have been influential.

And my girls were all there. Val brought cookies! The girls sat right at the bar beside me and colored their darling little hearts out on cocktail napkins.

But best of all was the genuine warmth of my bar buddies and so many friendly strangers who came thank me for this blog and to buy books. I never knew it mattered so much to so many.

Many said my blog is something they look forward to each day and they were sure the book would be even better (it is, by the way).

Somehow and without any intention, I’ve become a man many people think of as good, which is unsettling to my family who are accustomed to thinking of me as either weird or cranky.

It’s is as humbling as it is disconcerting. I’m becoming the kind of guy who routinely gets gunned down waiting in line for things like popcorn.

The very best involved an angelic woman who made her way around the row of bar stools with a magnificent smile on her face.

I swear I could see her halo hovering. It was either that or neon beer signs reflecting off the glass.

She said her son lives out west and is devoted to my blog and when she saw the story in the local paper about me, she had to come and buy a book.

Everyone in the bar stopped talking and listened to this sweet, wonderful woman gush on and on about me.

The people who know me best -- and they were all at the bar -- were dumbfounded, none more so than my wife who I’m sure suspected I’d put the woman up this, that I’d paid her to say nice things about me in front of my friends.

I’m ashamed to say this would not be without precedent.

It was July 2007. I’d arranged a golf trip to Gettysburg with three of my golfing buddies.

On the last day we were scheduled to play Penn National. It was about 103 degrees out, and as I learned too late, Penn National is located in a dry borough. We were to golf in the heat without the benefit of beer.

As I heard Jimmy Stewart describe it in an old western, we were “as dry as a grasshopper on a hot griddle.”

This was on my mind as I entered the air conditioned office of the marketing woman who’d arranged our tee times. She said it was a good thing I’d caught her. She was on her way out to buy beer across the township border.

Boy, would you mind picking me up a case of Yuengling?

A devious muscle in my mind began to twitch. I handed her some cash and said and could you say something so my friends will think I’m some kind of big shot? Feel free to lay it on thick.

That simple exchange was the foundation for one of my greatest pranks ever. For I’d unwittingly stumbled onto a frustrated actress who’d been handed her greatest role.

She was waiting for us by the tee of the second hole and, yeah, she was a real babe. Blond. A knockout. So she had all our full attention.

“Which of you is the great Chris Rodell?”

What followed was about six minutes of the most gushy flattery anyone’s ever said about me. Heck, about anyone. It was like she was auditioning to marry Hefner.

I couldn’t wipe the grin off my face. Part of that was runaway ego, sure, but mostly it was in stark appreciation of a virtuoso bullshit performance.

I think my favorite part was when she said, “Now, do you boys happen to like beer?”

“What would you say to two icy coolers of free Yuengling?”

“Well, nothing’s too good for friends of the great Chris Rodell!”

The praise was heady enough for me to at least consider making this gorgeous woman my away-from-home wife, but it was not to be. She got into her golf cart and drove off into the sunset, never to be seen again.

I suspect she got back to her office and found an on-line scouting report posted by my at-home wife.

But I spent the rest of the day basking in my friends’ sublime resentment. They hated seeing me the object of so much giddy praise because they knew it would go straight to my head.

The funny thing was, I became the great Chris Rodell. I golfed like a man possessed the rest of the trip.

I went six months before revealing the prank. Those were among the best six months of my life.

I wonder if when people expect us to be great we somehow can become great.

I’m going to try and make that happen for all the people who said so many nice things about me at The Pond.

Email ThisBlogThis!Share to TwitterShare to FacebookShare to Pinterest
Labels: Dave Carfang, Gettysburg golf, Penn National, The great Chris Rodell, The Pond Latrobe, Use All The Crayons