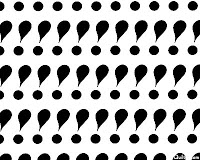 I wrote this piece about the mad proliferation of our most overused piece of punctuation, the exclamation point, in 2009. It was bad then. But it's only gotten worse. Way worse. Sure, those lines screamed for excessive punctuation, but I do enough of that in the following story.

The exclamation point, punctuation’s whoopee cushion, is putting on a tuxedo! It’s appearing in all the classiest places!

That’s why even life’s most mundane routines, things like attending church and having sex, are more fun with me!

See, there you go. I offered a lame little joke that might be mildly amusing without the -- “Wink! Wink! Nudge! Nudge!” -- of the exclamation point. Instead, an otherwise harmless line becomes as tedious as being stuck in the middle seat next to the obnoxious joker who caps every punchline with a giggly, “Get it! Get it!”

But in another cultural battle I sense I’m bound to lose, I see more and more exclamation points scattered like indelicate little erections throughout the future of my carefully crafted sentences.

See, while serious writers like me were shackled to our desks listening to tyrannical English teachers rhapsodize about things like semi-colons, she was off learning the tennis stroke that would earn fame and multiple millions of dollars.

She never learned that the exclamation point was the -- pick one: Henny Youngman, Pauly Shore, Russell Brand -- of punctuation. It had no place in serious writing. It was promiscuous. It was gaudy. It lacked requisite subtlety.

That’s why after her profanity (and exclamation point) laced tirade at the U.S. Open, she felt compelled to Tweet her remorse.

Here’s how she began her apology: “Hey guys!!!”

That’s how to punctuate a party invitation, not an apology. Like other celebrity tweeters, she relies on the exclamation point to convey emotions which she is incapable of otherwise expressing.

I’ve been reading The Times for 25 years and I don’t remember ever seeing a single exclamation point in a news column, but -- Shazam!!! -- there were three of giddy goodies romping across the sports section like a Radio City Rockette chorus line.

My first thought was there had to be an morning long meeting about how to deal with the wanton exclamation points, and that at least three copy editors felt honor bound to commit ritualistic hari-kari when the points sashayed into print.

It’s never with a sober sense of mournful obligation that I say to the boys, “There’s a big game on tonight. Let’s use that as an excuse to meet at the bar and get drunk.”

Not at all. I say it like this: “There’s a big game on tonight! Let’s use that as an excuse to meet at the bar and get drunk!”

If you’ve ever seen me say that, and I’ll say it three times this week, there’s a storm of confetti flying around my head and the John Philip Sousa march “76 Trombones!” is soundtracking the pronouncement.

But as tweets become more and more common, we’re bound to see more and more exclamation points in print as people point out the level of euphoria they’re feeling that a: they are done with the laundry! b: That the minestrone was delicious!! Or that -- hallelujah -- c: “Dancing w/ Stars” is on in 30 minutes!!!

It’s the grammatical equivalent of the discredited Cold War nuclear strategy of Mutually Assured Destruction (MAD). We’re on track to deploy so many multiple exclamation points that it will soon be impossible to register even poignant emotion in print without putting punctuation’s party hat on every sentence.

And that makes me sad.

Haven't read that one. I'll hunt it down. Love Steve. Just watched "Roxanne" again with the kiddos. Still hilarious.