Keepin' all my crayons sharp 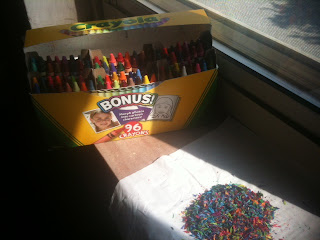 (1,087 words)
Charcoal and Lampblack: those were the only two colors the company that would grow to be Crayola Crayons produced when it was founded in 1864. And it took good lighting and a discerning eye to differentiate between the two. Today, the children who use Crayola brand products can choose from more than 120 different colors, including Atomic Tangerine, Laser Lemon, and Razzmatazz. What child isn’t glad to be alive in such a vibrant age? The company, which now earns more than $100 million each year, says the average child will wear down more than 730 crayons before he or she turns ten years old.

-- From the introduction to “Use All The Crayons!”

The crayon bit happened by accident. I sent the first signed copies out to Arnold Palmer and the people who helped me secure his endorsement and signed them the way all authors do.

So the first copies are the worst copies. They are signed in pen. They are blah. They might as well have been signed by John Grisham -- and who needs that?

It was boring as hell and it offended my creative sensibilities.

Certainly, I could do better.

So when I took a stack to Second Chapter Books for Laurie McGinnis in Ligonier to sell, I felt an urge to add some dash.

I don’t know why I didn’t think of it sooner, but I stopped by Kmart and set down $12.99 for the deluxe bonus box with 96 colors. My plans were to sign each book in a different color crayon.

Well, that still didn’t cut it. I decided to color in the eight little clip art crayons and any enclosed parts of the letters in on the title page. That looked nice, but there was still a big vacancy above the title the cried for coloring.

So I made a circle with a reddish Jazzberry Jam. I used a Periwinkle for the left eye and a Sea Green for the right. The Dandelion crescent turned it into a little crayon smiley face. I added little flairs of color extending out from the circle with little dots orbiting the sphere.

Beside it with a pointer arrow I added the helpful description: “Author Self Portrait.”

My friend Marjorie described it as a “minimalist Picasso.”

In two months I’ve already done more than 400 and no two are exactly alike.

That’s a lot of crayons.

Did you know a crayon box comes with a crayon sharpener?

This will make me sound like the world’s biggest candy ass, but the fingers on my right hand hurt after an hour or so of crayon sharpening. It takes like 25 twists to reclaim a point. The device is very inefficient.

I’m just one of those middle-aged men who likes having a proud point on all his crayons.

I try and use a dozen different crayons for every title page signing. I’m probably the only one who cares, but if I happen to use two shades that are similar I feel bad and have to fight the urge to set that book aside and start over. I worry someone grumpy’s going to say, “The book’s called ‘Use All The Crayons!’ and it’s obvious he used Burnt Sienna twice. That’s just lazy.”

I try and avoid earth tones. So the browns are still in good shape.

But I fear for the purples, reds, blues and greens. They are just so vibrant I wind up using them over and over again. They’ve become all dull and stubby, nearly too short to be of any use -- and we’re still talking crayons here.

The least used? The white. You can’t see it.

The most frequently used? The black. It’s the only color I use for nearly every signing. I for some reason have decided that every nose on the radiant smiley face should be black. The heavy stroke seems to anchor the whole thing.

And part of me feels it’s an approving nod to affirmative action and will resonate with those who believe in fair hiring practices. In that regard you could say I’m brown-nosing the black.

The sales at Barnes & Noble in Greensburg are exceeding my expectations. I’m closing in on 30 sales in one month. That’s great.

But about a week ago they moved the bulk of my books to Broadway. They now have a display of them prominently featured at the high traffic information island in the center of the store.

The sales staff there have been so friendly and supportive I wish I could give them all a great big hug. But there are unwritten rules and my hug might be misconstrued as a maneuver I picked up from one of the human sexuality books and that could be a problem.

So instead last week I brought them a big tray of cookies from Dainty Pastry, our local bakery, which I’m sure they appreciated more than than a big, grabby hug.

They told me this week they just ordered 19 more copies. That’s very good news. Word of mouth is really propelling the book. Thank you, my friends, for making that happen.

That means I’ll be up there this week spending about an hour or so in the cafe decorating books in ways that far beneath literary titans like Hemingway and Steinbeck. That means lots and lots of crayon sharpening.

I shrink not from the task.

A man like me always has a good sharp crayon at the ready.

And if something malfunctions I understand they have little Robin’s Egg Blue pills available for that sort of thing.

• “Use All The Crayons!” Still free, defying biz models

• Audio rights for “Use All the Crayons?” Sold!