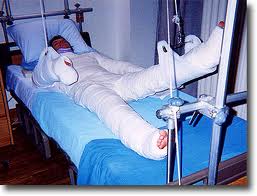 Concrete evidence is emerging to support my theory that our national health care crisis will vanish the instant we cure hypochondria, the irrational conviction that one is destined to become ill.

Hypochondria is not to be confused with typochondria, the irrational conviction that one is destined to become embarrassed by a malfunctioning spell checker.

What exactly is a super-uilizer?

“Super-utilizers are people who overuse emergency departments and hospital in-patient services, making more visits in a month than some people make in a lifetime.”

My mother’s had an unhealthy thread of hypochondria running through her health concerns, most of which I believe would disappear if she learned how to fast-forward through the commercials.

She sees, as we all do, ubiquitous pharmaceutical commercials asking if we’re feeling stressed, irritable, if our joints ache and if we’re having trouble sleeping.

The commercials tell her these are symptoms of various garden-variety afflictions.

I tell her not to believe the commercials. Those aren’t symptoms of illness.

They are symptoms of life.

The commercials have us all believing we should be living painfree lives clear through our golden years. But even rich people get sick and die. And if it’s going to happen to even them then what chance do the rest of us poor schlepps have?

And the doctors have a vested interest in ensuring people keep thinking they’re sick.

They conduct batteries of expensive tests designed to cover every complaining patient eventuality when the only thing they’re really interested in covering is their own soft butts.

That’s why I think one of the greatest physical attributes, one with which I’m blessed, is a really high pain tolerance. Some are born with it. Others, like me, acquire it through years of overcoming things like chronic hangovers.

If I stub a toe or feel an acute abdominal pain, my first reaction is to address the throbbing with something like, “Ha! You call that pain? That’s nothing! You should have felt it the morning after my Greek buddy’s wedding and all that guzzling of Mythos beer and flaming shots of Ouzo.”

I understand it’s a failing, but I extend this unsympathetic behavior to sick loved ones.

I remember one time my wife was belly-aching over what she described as the worst pain she’d ever endured.

“Pain?” I said. “You want pain? Try waking up Monday morning after a binge-drinking reunion weekend with me and the boys back at Ohio University in Athens.”

Big mistake. Her belly-aching was the result of a truly aching belly. She was in the delivery room about to give birth to our first child. Man, did she get pissed.

Note to first-time expectant fathers: Never include in your pre-natal pep talks moral boosters about how your wife should quit whining and just tough it out. A woman in the throes of labor can do or say things that’ll make you wince without ever lifting finger.

I know many strong men who pride themselves on their pain tolerance, but only one who revels in it.

He’s Frank, a guy I met at the kid’s afternoon bus stop. Normally I try and avoid conversation with bus stop parents because it takes small talk and busts it clear down to molecular levels.

Not with Frank. He not only overcomes pain from things like tooth aches, he performs self-dentistry.

If you’re ever with him at the bus stop ask him to show you the tooth he removed, sanded and glued back in place.

“The thing was just killing me,” he said. “Now, I wasn’t about to miss a day of work to sit around in some sissy dentist office for something I can do right here in my own garage.”

He told me in glorious detail how he took some pliers and yanked that sucker right out. After the bleeding stopped, he examined the ivory and the vacant spot behind his lower lip.

“It had this jagged edge. I knew if I could file that off I could take some boat glue and put it right back in place.”

And that’s just what he did. He was justifiably proud of his work. I think if we hadn’t been out there in front of all those kids he’d have invited me to stick my finger in his mouth to test the tooth’s stability.

Imagine how much we could reduce health care costs if everyone in the country reacted to pain like Frank.

I’m pretty sure I couldn’t even go that far. But I’m willing to do my part.

Next time my mom complains about feeling sick I’m taking her straight to Frank’s garage.

Good details and contrast between dark shadows and white areas. You may know the work of the Greek-Italian surrealist artist Giorgio de Chirico, much of whose work you can browse at wahooart.com. This one, http://EN.WahooArt.com/A55A04/w.nsf/OPRA/BRUE-8EWHDW, has the same feel as your drawings.