Of golfers and God 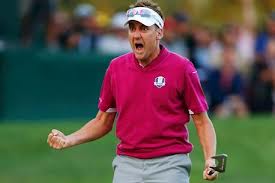 The most fascinating exchange to emerge from golf’s ballyhooed Ryder Cup matches took place far from the fairways, a full hour after the Euros shocked Team USA with the biggest come-from-behind victory in event history.

It was a press tent David vs. Goliath, 12 against 1, the same odds there’d have been at the Last Supper had the waiter challenged the apostles over a too cheap tip.

Forgive me, please, for inundating you with so many religious references, but that’s what happens when you watch too much professional golf these days.

Many of our top golfers are devout Christians. And I mean really devout. I’m not sure Christ was as Christian.

It happened on Saturday with Webb Simpson after he and fellow Christian Bubba Watson won their match over Euros Justin Rose and Francesco Molinari, two golfers who, if they are at all religious, don’t broadcast it.

Simpson is different. When it comes to Christian broadcasting, he could give Pat Robertson a run for his mammon. Simpson’s Twitter feed identifies him as a “sinner loved by a Savior.”

So when the reporter asked about his mechanical golf skills, Simpson switched subjects and gave full credit to the Lord.

I’ve known from the bumper stickers that Jesus makes a dandy co-pilot. I never knew He could caddie.

His contention is unsettling to me and anyone else who is eager for God to answer our prayers about ending world hunger, war, hatred and 20 consecutive years of losing Pirate baseball.

Simpson makes it sound like God’s priority is his putting.

It riled me a bit, but I was able to set it aside. I understand today’s Christian athletes are like the Pharisees of old, resplendent in their self-righteousness while doing precious little with amounts of money most would consider ungodly. Simpson, 27, has earned $11.3 million in four years. His Christianity certainly doesn’t involve a vow of poverty.

So, yeah, I confess to chuckling aloud Sunday when it became apparent that part of God’s plan was for Simpson to hit one of the most humiliating shanks in Cup history on his way to getting creamed by Englishman Ian Poulter (above), a golfer who looked positively demonic thrashing the angelic Simpson.

It was that way, too, with fellow Christians Watson and Matt Kuchar. The Sunday matches were one of the worst Christian massacres since the team went up against the Lions.

So the post-match team press conference became must-see for me. Hearing how athletes deal with embarrassing defeat is always more enlightening than hearing how they celebrate victory.

And the boys didn’t disappoint.

They took turns lamenting their anguish, their remorse and trumpeting how heroic they behaved in noble defeat. A few wiped tears. The display made me glad these delicates aren’t patrolling the front lines in Afghanistan’s Helmand Province.

Then came an electrifying moment. Someone with a British accent asked -- and I must paraphrase -- “Given your apparent devotions, did any of you ever seek solace from your Creator when loss was apparent?”

What he meant was, “Did any of you in your moment of torment think to beseech the heavens,  ‘My God, my God, why hast thou forsaken me?’”

Clearly he was on a mission to snark, but it’s a perfectly valid question and millions of us wanted to know why The Savior, who the day before was instrumental in their divine victory, let them fall to the agnostics when it mattered most.

No one said a word. After about 12 painful seconds, the moderator moved on. It was very disappointing.

I would have liked it if one of them said, “You know, maybe we were wrong. Maybe God doesn’t care whether we win or not. Maybe we’re really just a bunch of privileged kids who grew up convincing ourselves God ordained us to earn millions when really it’s all due to years of practice learning to hit soft fades in high winds.”

As you may have surmised, I consider myself an Oskar Schindler Christian. He was the Nazi associate whose crafty bribes saved thousands of Jews from the ovens.

I like to believe real Christians will never rest smug we’ve ever done enough to alleviate all the suffering endured in this world, that our good fortune is all part of God’s plan while the misery of others is also pre-ordained.

Of course, Schindler was only interested in saving Jews.

Golfers like Simpson seem more concerned flouting their conviction a Jew saved them.

• When Christ is a cudgel

• Merry JesusChristmas to all (sinners, too)!