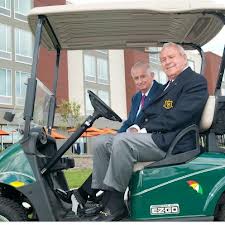 The car was packed. We’d done security recon around the house. The light timers were all set.

Just one thing missing from the standard we’re-off-to-vacation checklist: gas up the car.

Heck with it, I thought. I had about a quarter tank left. And if I ran empty on some desolate stretch, I could just stroll home.

Most of you know I’m a bona fide travel writer. I have a self-interest in encouraging readers to travel to as many far-flung destinations as they can manage. So I’m kind of breaking the industry rules when I share we had one of our best vacations by staying at a hotel so near Val and I took turns returning home to let the dog out to pee.

Arnold Palmer and Marriott partnered to build a new SpringHill Suites hotel that opened in June.

Palmer wanted a lodging amenity that would allow area guests to enjoy historic Latrobe Country Club. The club is a destination for Palmer pilgrims who want to immerse themselves in the history of man many of them revere.

He’d have loved the new hotel.

We watched them build it, me from the inside out, as well.

I did a story about the hotel’s construction for Palmer’s Kingdom Magazine. Three months before it was due to open I was on the roof of the place with the construction foreman sharing Palmer stories.

“Man, wait ‘til you see this place when we’re finished,” he said. “You’re going to love it.”

He later showed me one of Palmer’s most unusual autographs. It’s back in the boiler room where Palmer, then 82, clambered down into a muddy ditch to scratch his name with a nail in a three-foot spread of wet cement.

The hotel surpassed my expectations. I do think of my late father when I walk into the lobby. The decor is too tasteful to say it looks like a Palmer museum, but there are enough flourishes to get a real sense of the man and what he means to golf and Latrobe.

Rates vary, but the one that sticks out in my mind is $175 per night. That’s reasonable for a Marriott, outlandish when you realize that includes a free round of golf at L.C.C.

Of course, my daughters don’t give a crap about any of that. They just thought it would be cool to stay in a new hotel.

But spending an overnighter at a hotel within view of our home seemed an extravagance.

Not to the 12-year-old. “You’re friends with him, aren’t you?” she asked. “Can’t you just say you’d like to spend the night there? It’s not like you’re asking to stay in his spare bedroom.”

Her audacity convinces me she’ll someday be a really fine travel writer or perhaps a shakedown congresswoman.

No, I can’t ask Arnold Palmer that. Happily, I know people who work for him, one of whom oversaw the hotel’s construction.

I can’t ask him for that either. But he was gracious enough to offer a deal too sweet to refuse.

So Friday afternoon we got the kids off the bus and told them we were taking them to Nana’s where we’d planned to abandon them for the weekend. I believe things are more fun if at first you’re tricked into thinking they’re going to really suck (my wife keeps waiting for the matrimonial payoff in this).

We had about four minutes of surly complaints when I pulled into the hotel and told them it was April Fool’s in October. We filmed it as they pulled open the door to room 404 to find we’d checked in early and decorated the beds with all their favorite stuffed animals.

We could see home from our room.

We ordered a pizza, watched a movie and spent hours in the pool where I had a friendly chat with a guy from out of town. He and his family were from Greensburg, about eight miles away.

“I know a guy involved in a time share,” he told me. “He’s right now running to Wildwood, New Jersey, and they’re driving five hours to do about what we’re doing here.”

We talked about how we’d both overstressed trying to conceive whopper vacations when there are appealing options right under our noses.

Sometimes novelty’s right down the street.