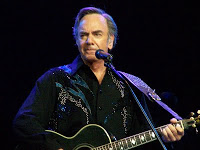 When this originally ran in Oct. 2009, someone commented that the line, "Daddy never wore blue jeans," would be a great first line for a novel. I agree. Maybe someday. No matter. Three years later and I still have too many jeans and still think I need more.

The baseball playoffs start today and that means plenty of bar time. I don’t want risk having to set my soft ass down on stool 7 without the manly protection of a really tough garment that’s up to the task.
Posted by Chris Rodell at 12:56 PM

Email ThisBlogThis!Share to TwitterShare to FacebookShare to Pinterest
Labels: Forever in blue jeans, most men are sissies, Neil Diamond, rebel without a cause, why are Americans so crazy for blue jeans