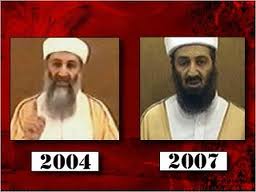 It’s been a week and I’m still riveted by all the bin Laden news. I want to know everything about how he lived and how he died.
I wish I could say my focus is on the historic implications of it all, but my shallow nature is getting the better of me; I’m consumed with an aspect of his existence that will soon be lost to history.
The man dyed his beard.
The vanities of powerful men and their infatuation with their own hair endlessly fascinate me.
Take Donald Trump. His hair’s such an obvious punchline I’ve never really given it much thought.
But it is now so in our faces it must be addressed.
First, the color. Or colors. Parts of it have a reddish cast. Then there are blond streaks. Some sweeping waves are pumpkin-shaded. When the TV lights hit it, it seems to shimmer like a trout just lifted from the creek.
Trying to describe it is like explaining algebra to fourth graders. It makes my head hurt.
It’s like a combover done by an octopus. It goes in every direction all at once. I imagine if viewed from a traffic helicopter it must look like one of those sprawling Southern California interchanges where five major interstates noodle together and head to 10 different parts of Los Angeles I have no interest in visiting.
I guess it works for him. He’s rich and famous, has a beautiful wife and throngs of pitiful idiots who think, gee, now there’s a man who’d make a great president.
But every generation of Americans needs its Trump, or at least guys like Leno and Letterman certainly do. They fill an essential role of appearing to have all the answers in a complicated world where people yearn for bombastic simplicity. In the end they all burn-out, embarrass themselves or their followers momentarily come to their senses and move on to the next loud-mouthed charlatan.
It’s just fortunate for all the people who’d like to see President Obama re-elected there is a surfeit of these men and women and they are right now leading the GOP straight over an electoral cliff.
But the vanity of bin Laden surprises.
He was a man who self-righteously believed his violent brand of Islamic fundamentalism would sweep the globe (wrong), that the Middle East would crumble under his repressive vision (wrong), and that Americans were too weak and distracted to finish a war he started (wrong).
I can understand Trump’s eagerness to appear Beiber-like in an American culture obsessed with youth, but what motivated bin Laden?
Was it an eagerness to appear virile to his four young wives?
Couldn’t be. My sense is these women weren’t like many American wives. They seem to lack sass or the spousal fortitude to taunt an aging hubby about graying hair, a beer belly or his inability to please them in the conjugal way.
But there was nothing to suggest any “Desperate Housewives” thing going on in the secretive Abbottabad compound. It’s doubtful any of these girls would leave bin Laden to fool around with Ahmet the beguiling pool boy.
Maybe, even with all his hatred for modernity, he’d absorbed certain aspects of American culture that insinuate youth reigns supreme.
Maybe he thought he needed to appear as one of them to inspire the suicidal youth he’d send in waves to their doom. I’ve yet to see a martyrdom video featuring a Santa Claus beard.
The clips we’ve seen show him watching old Al Jazeera tapes of himself, but maybe they’ll release one showing him watching The Disney Channel and shows like “iCarly” where everyone over 25 are imbeciles.
Or maybe we’ll see a clip of him becoming silently animated when the Keith Hernandez/Walt Frazier “Just For Men” hair coloring commercials circulate.
Either way, his vanity confounds. Maybe this sheik had a rebel James Dean streak in him.
If that’s the case, it’s not wild to speculate bin Laden’s last mortal thoughts dealt with, not what had been done, but with what was to be.
“Although this is the end I die at peace, assured my funeral will be tumultuous with comely maidens swooning over my fair features and young holy warriors attesting how I fought aging and crusading dogs with equal vigor.
“And, no doubt, legions will stand in line for days to admire my still-youthful face.”
Wrong again.
Posted by Chris Rodell at 1:21 PM