A Derby Day re-run for the roses 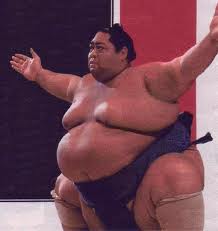 I woke up this morning fired with the ambition to start this day, as I always do, by blasting “Dead Flowers” by the Rolling Stones and writing a mini-book review of Keith Richards’ “Life,” which I’m suggested they should rename “Life Wasted” or “Wasted Life.”
But it wasn’t going smoothly and I got sidetracked with house chores, play time, etc.
“Dead Flowers” is a first Saturday in May tradition because the song, a dandy, alludes to Kentucky Derby Day, one of my favorite sporting traditions of the year.
So instead of writing something fresh, I thought I’d trot out this short thoroughbred-themed post from last year about how the Triple Crown would benefit if just one of the races features jockeys weighing in excess of 340-pounds.
And then I’m off to have a snort of Mint Julip down with some buddies at The Pond before racing home to watch the festivities with my darling girls.
My pick: Pants on Fire. No lie.
Enjoy the race!
For the good of the sport, The Triple Crown needs one race where the jockeys are jumbos.
I’m proposing that horse racing alter its rules so the Kentucky Derby today is run, not by elfin athletes, but by king-sized couch potatoes who weigh no fewer than 340 pounds each.
See, The Triple Crown races are among my favorite sporting events. Combined they conclude in under 7 minutes.
The Super Bowl has interminable commercial breaks that endure that long.
I want one race to take as long as the Super Bowl. I want to be able to invest a full afternoon in watching the ponies sluggishly trot ‘round the track with the occasional need to stop to graze or access a convenient water trough for quenching swigs.
A 340-pound jockey would ensure this. Note that the weight wouldn’t include the cooler full of beer each jockey would be allowed to strap to the saddle.
The weigh-ins would be priceless viewing. Instead of traditional colors, each jumbo jockey could wear a shirt promoting his -- or her -- favorite saloon or bowling alley.
There’s not a tavern in the land that couldn’t field three or four bar regulars worthy of consideration. I’m drinking buddies with tons of guys who’d qualify. Or to be more accurate, I’m buddies with about five guys who if thrown together in one big sack would weight one ton.
And 340 is a good weight. It’s ample enough to meet today’s obesity standards, but not so much so that many jockeys could make it without dietary supplements. Thus, pre-game rituals might show plus-sized jockeys scarfing down buckets of The Colonel’s chicken in order to make designated weight.
The spectacle would flip on its head the unhealthy anorexic trends that ravage traditional diminutive jockeys obliged to starve themselves to meet the required 126 pounds.
In fact, much of the pre-race hype could be devoted to another rising American pastime -- competitive eating.
“And Frank, representing The Outdoor Inn in Queens is going double fisted with a Whopper with triple bacon and the dangerous extra cheese pizza that was blamed for the unfortunate cardiac arrest of Tubby Tom at last year’s weigh-in! But Pam from The Smilin’ Hog Bar-B-Q & Foam in Biloxi is coming on strong with a stack of baby backs dripping with the home team sauce, now available on-line and in Piggly-Wiggly’s all across Dixie.”
Of course, nothing would match the excitement of the moment when the loads are loaded into the starting gates.
“And they’re off!”
Or not. I speculate that with a 340-pound jockey on its back, many of these thoroughbreds wouldn’t even budge. And wouldn’t that be exciting!
“Not one horse is moving! Not a one is able to manage the first step! But wait! The no. 4 horse is staggering out of the gate! She’s taken four steps . . . five . . . Oh! No! The filly’s collapsed!”
Given those dynamics, it’s likely the 1 and 1/4 mile Derby at Churchill Downs would take about three hours, rather than the usual two minutes.
The final “sprint” down the homestretch would allow gamblers plenty of convenient time for bathroom and smoke breaks before the action got down to the wire.
Some animal rights activists might protest that the entire spectacle might be cruel to these huge beasts.
They might say they are not fit enough for the race and the exertion could kill the dumb animals.
And they have a point.
But there’s an easy fix for that.
Just have ‘em all read and sign waivers before the race.
Tweet of the Week from 8days2amish: "Just learned bin Laden's full name is Osama bin Muhammed bin Awad bin Laden. Give him four more bins and he could be a Dollar General store."
Posted by Chris Rodell at 2:40 PM