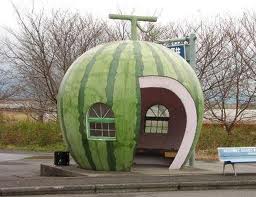 Lost amidst all last week’s sensational news about celebrity love children, hotel maid-raping bankers and the daily hilarity from Newt Gingrich’s presidential campaign was a report with truly global implications.
Chinese watermelons are exploding!
“Entire fields of watermelons have become like land mines,” says Wang Liangju, a professor of horticulture at Nanjing Agricultural University, who blamed the exploding watermelons on the overspraying of the chemical forchlorfenuron, used to make the fruit grow faster and larger.
We can all be grateful this ill-conceived experimentation didn’t start with Chinese cattle farmers or parents who dream of their children following in the size 18 footsteps of NBA star Yao Ming.
The news is important because we’re going to need watermelon the size of Volkswagens if we’re going to feed a world where the only thing exploding more alarmingly than our fruits is our population.
The professor says the report underscores how farmers in China are abusing chemicals in the hopes of growing larger fruits and vegetables more quickly.
The potent chemical is allowed in the U.S. on kiwi fruit and grape, which is a sensible start. Grapes the size of pineapples sounds convenient to me, overlooking the fact we’ll likely need full body bibs to munch just one.
But none of this is going to do anyone any good if forchlorfenuron is some diabolical tease farmers think they can spray on any old thing to instigate tremendous growth.
If Chinese farmers are anything like American farmers or men in general they’ll spend a lot of time wondering what else they can spray the stuff on to get it to grow to preposterous dimensions. And once this genie gets out of the bottle, watch out.
I’m thinking here of bald men and those cursed by certain masculine insecurities targeted in the commercials they run on all-sports talk radio.
I know lots of men who dream of access to something like forchlorfenuron to rub on their scalps or other parts of their bodies where they spend a lot of time seeking growth or at least girth.
The threat of searing self-detonation would do nothing to dissuade these driven men.
Me, I’d like to see what would happen if I sprayed some if on my savings account.
Really, the perfect solution to all mankind’s problems is to take massive tanks of the chemical up into orbit and use it to seed storm clouds.
If the compound works the way they say it does I’d like to see what would happen if we gave Mother Earth a great big quenching dose of the stuff.
After all, if we keep super-sizing our vegetables the way we’ve been super-sizing our fast food consumers, we’re going to run out of room.
We’ll need an Earth the size of Jupiter to keep from stepping all over one another.
Think of the advantages.
It would put welcome distance between in-laws who are now an unnerving hour away. An earth energized with forchlorfenuron would extend that skimpy buffer zone to about four days drive one way on the Pennsylvania Turnpike.
War in the Middle East would dissipate as cramped, 9-mile wide Israel became as vast and spacious as the Australian outback.
Of course, as we’ve seen, there could be unseemly side effects of applying the tricky chemical. Foremost being that Earth could  . . . explode!
If that’s the risk, well, bring it on.
Modern man must pick our poisons.
Death by cosmic apocalypse seems somehow tidier than getting shredded by seeds, rind and watermelon mush at the Sunday picnic.
Posted by Chris Rodell at 12:23 PM